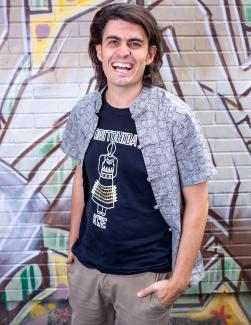 Jack has been working for social justice causes in Canada and globally since 2007. A graduate of the University of Ottawa, Jack worked for three years at the Canadian Council for International Co-operation. He has extensive volunteer experience with organizations such as Oxfam Canada, the Canadian Hunger Foundation, Development and Peace, the Ontario Council for International Co-operation, and with SOPEDI-ONG in Benin. Jack has also worked on social justice issues in Ottawa, including working for l’Arche Ottawa in group homes for adults with disabilities.

Jack works as Inter Pares' Fundraising Manager. Jack’s focus is engagement with long-term donors, working with donors who make legacy gifts, and coordinating relationships with foundations. Jack  holds the Certified Fund Raising Executive designation, as of 2017.  He has written about his fundraising work in articles published by the Grassroots Institute for Fundraising Training.

Jack is also a musician. He has worked as a performer, music teacher, community ensemble leader, music therapist, studio musician, and composer. You can listen to some of his compositions on his soundcloud page.

We are together in the struggle for social justice. Make a gift in solidarity.