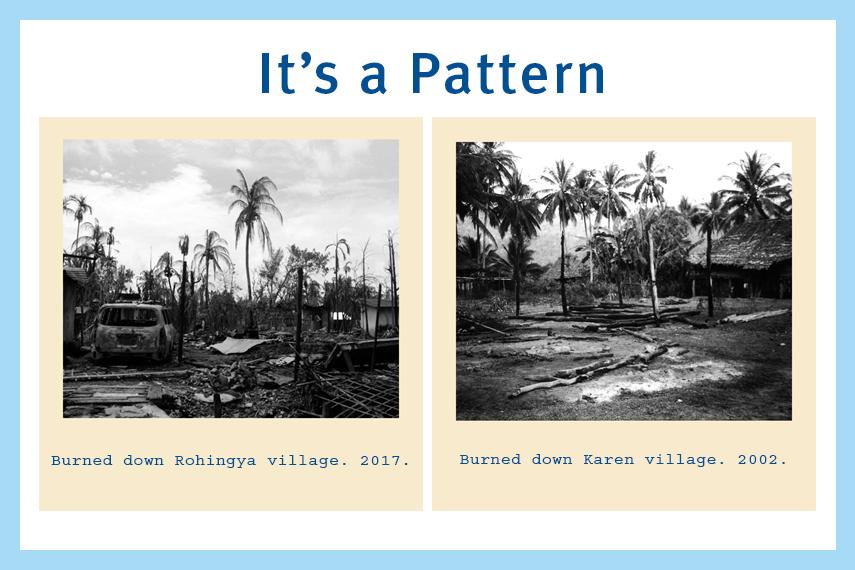 Thirty years ago today, most of the world remained unaware as thousands took to the streets of Burma to demand democracy after decades of military rule. The army responded to the protestors with bullets. No one knows how many people were killed on August 8th, 1988; conservative estimates start at three thousand. Contrary to popular belief, the power and control of Burma’s military has only tightened since then, not lessened.

The horrifying attacks against Rohingya that came to the world’s attention nearly a year ago are not the first time Burma’s military has attacked its own people. The escalation of the Rohingya genocide is another chapter in a complex and decades-long tale of state oppression and abuse throughout the country. In order to effectively intervene, Canada must look at the whole country and its history.

Burma was cobbled together by the British from a diverse territory larger than Alberta, shared among the Shan, Karen, Kachin, Chin, Wa, Mon, Karenni, Arakan, Burman, and other peoples – all with entirely distinct cultures and languages. No one has ever fully controlled the whole country.

When Burma gained independence from Britain in 1948, it was a centralized state dominated by the Burman ethnicity. Systemic discrimination against non-Burmans led to tensions and armed resistance. Successive military regimes used scorched-earth campaigns to try to extend sovereignty to the borders. They implemented an assimilation policy of “Burmanization” – a project to create one country with one religion and one language. Ethnic villages were seen as needing to be conquered and controlled, and their populations made to speak Burmese and to practice Buddhism.

But Burma’s peoples resisted. Military campaigns faced non-violent and armed resistance. As offensives became more brutal, the resistance became more determined. Villagers hid in the hills rather than submit to military control, while ethnic groups ran their own regional governments in autonomous zones. Many ceasefires have been signed and peace deals negotiated over the years. But without a political resolution, most of those ceasefires eventually fail.

It is only relatively recently that Burma’s dictators were replaced by a military-dominated government. Today, travel magazines promote idyllic tourist hotspots and cultural landmarks in the metropolises. But in large swathes of Burma’s ethnic states – the 40% of the country in which ethnic minorities are the majority – too little has changed. There are military skirmishes in Chin and Karen State, major offensives in Kachin and Shan States, concentration camps in Arakan State, and internal displacement camps in Shan, Kachin, Chin, and Karen States. There are state-run residential schools in Chin State which force Christian children to convert to Buddhism. There are journalists and human rights defenders in jails, and villages are increasingly militarized. Large resource extraction projects are accompanied by military clearance operations and enrich the military and its cronies. Humanitarian aid to displaced communities is regularly blocked. Community groups have documented the use of rape as a weapon of war in almost all ethnic states.

There is nothing new about what is happening to the Rohingya, who like other ethnic peoples have lived through waves of violence and displacement. It is a pattern. We have a responsibility to recognize this and act. Canada needs to address the driving force behind this genocide, and not only to mend the immediate wounds. But the Burmese government has stoked anti-Rohingya sentiment among the general population. International accountability measures that focus solely on Rohingya risk further inflaming prejudice – making prospects of refugees’ successful return even more distant and unlikely, and creating real danger for those who still remain in-country. A narrow focus would also be a disservice to other long-suffering ethnic peoples, who have also experienced war crimes at the hands of their own military and deserve justice.

Canada needs to have a comprehensive approach to Burma that takes into account the full scope of these crimes as well as the country’s highly flawed democracy. For over thirty years, people in Burma have been demonstrating and surviving. It is time we break the pattern.