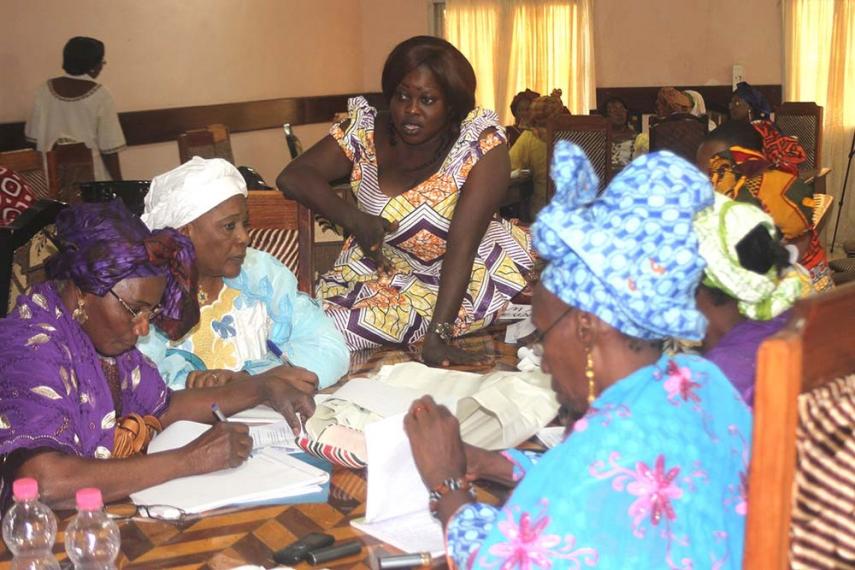 Women leaders sharing their experience from the conflict Credit: ACORD

The community leaders who gathered in Gao last July had seen their share of horror, of hope, and of hope betrayed. Gao, on the banks of the Niger River, is the
provincial capital in one of the areas of Mali most hard-hit by the recent civil war. With the support of ACORD, Inter Pares’ long-time counterpart, 24 women and 24 men from the women’s rights organizations GREFFA and AMPRODE gathered to learn and share ideas of how to transform national conflict into an authentic and sustainable peace.
Their first task, they felt, was to address some of the consequences of the war: the
scars, fear and anger that divided their communities and their country.
Just a month earlier, a peace accord had been signed between the government and rebel groups to end three years of armed conflict. During the war, human rights were systematically violated by all the warring factions. But women and girls, who were largely non-combatants, were disproportionately targeted for violence by each faction. There was widespread gang rape of women and girls from “enemy communities.” They were forced into marriage, beaten and flogged for perceived sins, widowed, and forced off their lands. At the same time, and despite increased restrictions on their freedoms, women played a central role in keeping their families alive, maintaining gardens and local markets, and receiving and sheltering people fleeing the violence.
At the meeting in Gao, the women reflected on the causes of the violence, and the distrust, fear, and emotional scars it had left. Coming from different regions and
ethnicities, they talked about social exclusion in their own communities. They shared experiences of the increased competition for land and water resources among people made more desperate by land grabs for mining and export agriculture and by the local impacts of climate change.
Through such sensitive and difficult discussions, they began to identify what they could do in their communities to construct a peace that went beyond an end to the fighting, that recognized and met the needs of women, their families, and communities torn apart by war. On the banks of the Niger River, these women – and the men who support them – came together to recapture hope, and to become the model for the peace they intend to build.