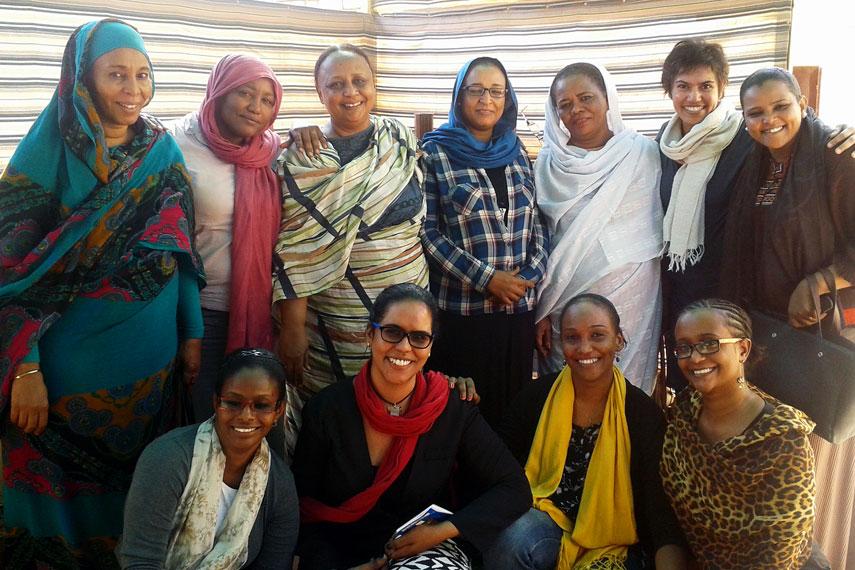 Inter Pares Co-Executive Director Rita Morbia (second from right, back row) with staff members of the feminist Sudanese Organization for Research and Development, and other women's rights activists in Sudan.

Inter Pares is an intersectional feminist organization. We see issues of equality – between women and men in particular, but also between North and South, those marginalized and those privileged, relating to race and class as well as other forms of socially and culturally constructed hierarchies – as important elements of our political analysis. We value methodologies that promote collaboration, foster good process, and encourage the agency of those with less power.

Our feminism is trans-inclusive. We understand that advancing trans rights is essential to achieving gender justice. We are in solidarity with the trans women who are shaping feminist and LGBTQI2S+ movements, and embrace trans and non-binary activism. We celebrate trans leaders throughout history who have paved the way for social justice. As a feminist trans-inclusive organization, we work with counterparts and allies who advocate for trans people’s right to live without fear of harassment, violence or discrimination.

A significant portion of our programming relates to women’s rights. We often support women’s organizations directly as well as programs that encourage women’s leadership. Inter Pares and our counterparts seek to create conditions under which women can exercise their full autonomy and freedom: choosing how and with whom to live their lives; choosing if and when they have children; choosing their livelihoods; and control their own destinies and futures.

In Latin America for example, our support has allowed women to use the judicial system to address issues of sexual violence in conflict such as in Guatemala and in Peru, and support women who seek to challenge impunity through legal and political means. We have also provided women with psychosocial counselling in such cases.

In the Philippines, after a decade of work, Inter Pares counterpart Likhaan won a major victory in the struggle for women's rights with the passage of the "reproductive health law" in December 2012. This law sets out enforceable national standards, including funding for reproductive health such as pre- and post-natal care, emergency obstetric care, and contraception.

Inter Pares is a feminist organization in both our politics and our structure. In the spirit of our vision to ‘globalize equality’ everyone at Inter Pares shares the management of the organization, which operates on principles of equal responsibility and equal salary, working by consensus, while also nurturing women’s leadership.

To learn more about how feminism affects the way we work and the results we have achieved through this analysis, have a look at the product of our feminist documentation project Does it Work? Feminist analysis and practice at Inter Pares, an occasional paper stemming from a two-year participatory research project.