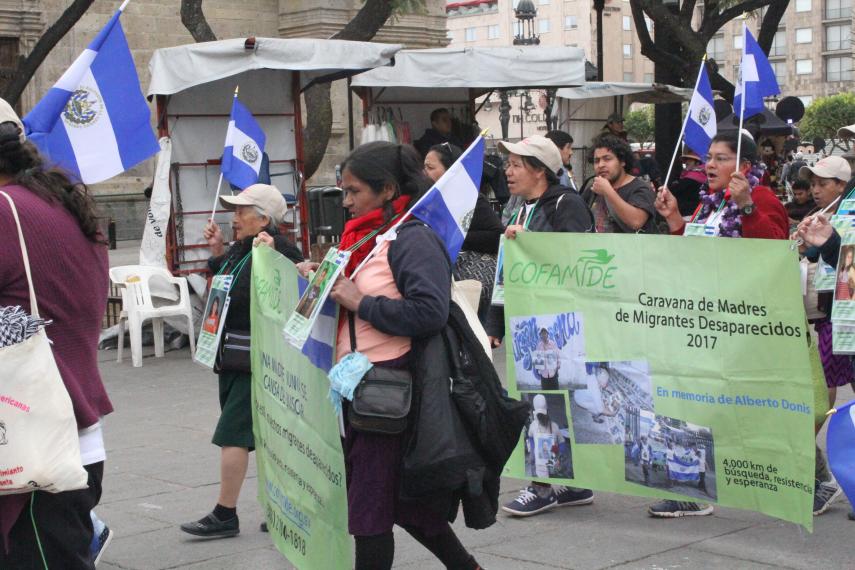 Inter Pares counterpart COFAMIDE organizes an annual caravan of families to search for missing loved ones who disappeared on the route north. Credit: COFAMIDE

On the morning of March 6, 2010, when her 18-year-old son Heriberto said goodbye and left for the United States, Maria Elena Larios de Gonzalez had no idea he would vanish.

Three years later, and still without news, she came into contact with the Committee of Families of Deceased and Disappeared Migrants of El Salvador (COFAMIDE), an organization formed in 2006 by families who joined forces to support each other and search for loved ones who went missing on the route north. A longstanding counterpart of Inter Pares, the organization also advocates for policy and legislative changes to ensure safer and more dignified conditions for migrants and their families.

With COFAMIDE’s help, Maria Elena reported the disappearance of her son. She also participated in workshops and received psychological support. “I used to cry and cry. I didn’t speak up, I didn’t demand anything”, she says. But as she became part of a community of people who shared similar experiences, she became stronger: “The tears turned into strength, courage, and struggle.” Today, she sits on COFAMIDE’s board and supports other families, while continuing her own search.

Once a year, COFAMIDE coordinates a caravan of mothers who travel through Central America and Mexico to investigate the whereabouts of missing migrants and to raise their profile. It was in Chiapas, Mexico, as part of one of these caravans that Maria Elena found the first clues to Heriberto’s whereabouts in six years. Out of 306 cases, COFAMIDE has so far located 44 persons, roughly half of them alive; for the others, the organization undertakes the difficult task of informing families and helping them repatriate the bodies.

There was no single reason why Heriberto Antonio Gonzalez Larios decided to leave El Salvador. An affectionate joker who liked to tease, he was about to start a family and was eager to work. Violence and the lack of opportunities, among other factors, have forced him and an estimated one fifth of the country’s population to get out. “It used to be about the ‘American dream’,” Maria Elena explains; “Now, people leave just to save their lives.”

Like so many others, she remains determined to keep searching for her son and to accompany other families, so they know that they are not alone. No matter the obstacles, and until they find them.

As Maria Elena became part of a community of people who shared similar experiences, she became stronger: “The tears turned into strength, courage, and struggle.”