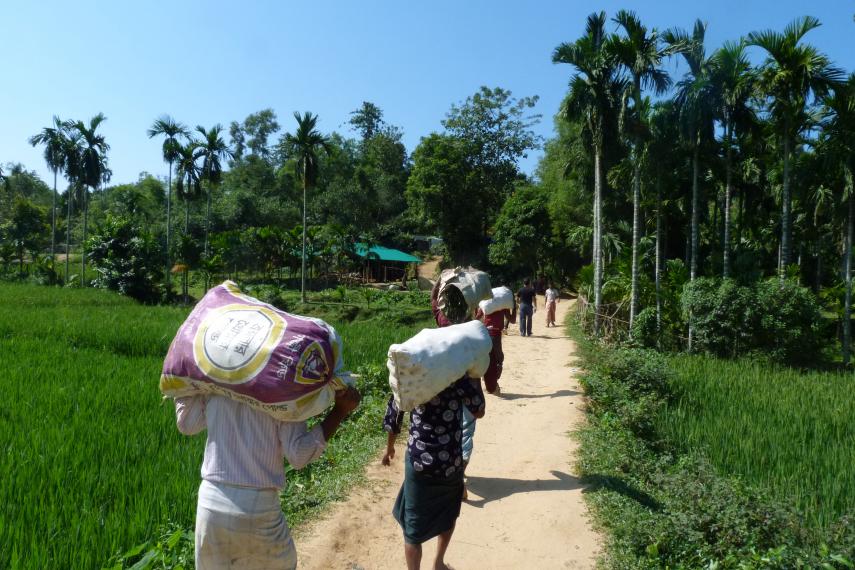 In 2017, the latest wave of genocidal brutality by Burma’s armed forces and militias towards the Rohingya came to the world’s attention. The murder, mass rape, and atrocities documented by Inter Pares’ counterparts Kaladan Press Network and Arakan Project left an estimated 10,000 people dead and nearly 400 villages destroyed. Roughly 700,000 people fled to Bangladesh, where they joined the some 400,000 who had fled earlier waves of violence. The million-plus Rohingya in Bangladesh are now among the several million people worldwide who, over the past half-century, have fled Burma’s brutal campaigns of territorial control and ethnic assimilation.

When people speak of migration, a distinction is often made between voluntary and forced displacement. “Refugees” are people like the Rohingya, who are forced to leave their country in order to flee persecution or war; “migrants” are people like those in the Central American caravans, who are frequently portrayed as choosing to move solely for economic reasons. The immigration laws that determine migrants’ lives are based on this forced/voluntary distinction, but the reality is much more complex. In the caravan example, for instance, Inter Pares’ long experience in the region has underscored the depth and ubiquity of threats to women in Central America, where the legacy of armed conflict has been a weakened state, emboldened gangs, rampant violence, and a culture of impunity for crimes against women and girls.

Industrial activities by the global North have also exacted a price on people’s abilities to live full and safe lives in their home communities. Natural resource exploitation by Northern companies has contributed to poverty and conflict, forcing untold numbers of people to migrate. The climate crisis has exacerbated this reality: today, 60% more people are displaced by natural disasters than by armed conflict.

Even among those displaced by armed conflict, people are not automatically considered to be refugees. In southeastern Burma, for instance, some people became internally displaced within the country’s borders; others fled to one of the refugee camps in Thailand that are supported by Inter Pares’ counterpart The Border Consortium. But many, many others crossed the border into Thailand discreetly as “migrants” to avoid attracting attention, where they are not given any official support or recognition as refugees.

In recognition of these flawed distinctions, Inter Pares and our counterparts use a holistic approach when working with conflict- affected people. By working on both sides of national borders, and by addressing the drivers of displacement, our goal is to support people’s efforts to build safe and fulfilled lives wherever they live.

The immigration laws that determine migrants’ lives are based on a forced/ voluntary distinction, but the reality is much more complex.