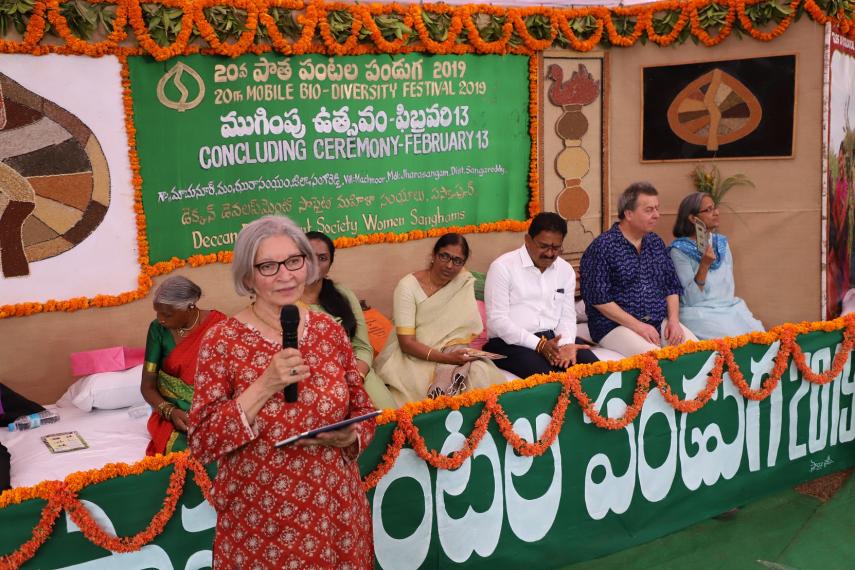 Greetings from everyone at Inter Pares.

I am here today as a board member of Inter Pares, a Canadian social justice organization. These two days have been very inspiring. This is the twentieth anniversary of the Mobile Biodiversity festival. You deserve a hearty congratulations for continuing to spread the message of biodiversity from village to village. Your sanghams and Deccan Development Society are showing people in India and around the world the importance of sustainable development.

I was in  Pastapur in 1995; I spent a day in the gardens and my guide was a little girl who was called “General” by everyone. I met her today - Narsamma - she is now running the community radio! I am so happy to meet her. I had participated the workshop attended by 70-80 women discussing and making decisions about how to run the Sanghams. We had a communal lunch of Jowar Bhakari and spinach. Later I saw documentary films made by the Community Media Trust in which women, who had never held a camera before, were learning to tell their own stories in their own words.

Sateesh will remember that in 2008, we organized the launch of the book Affirming Life and Diversity: Rural images and voices on Food Sovereignty in South India. We screened 3-4 of DDs' videos, followed by a panel discussion with Peter Wintonick, an award-winning documentary filmmaker who came several times to Hyderabad to work with street youth, my mother Vijaya Mulay, a great admirer of the Media Trust Collective and of Satheesh, and Marie Boti who made documentary films in the Philippines on women’s issues. The topic discussed was “is there a role for community media in bringing about social change?” The panel yesterday discussed this very topic at the second Jai Chandiram Community Media film festival. On that day, the auditorium was packed and there was  discussion of the films, the one on Bt Cotton and the Sangham shot that Sateesh mentioned yesterday; It was appreciated greatly. There was a consensus that community media differs from main-stream media because the community is a part of the decisions made about their stories and about their day-to-day struggles.

I also came to this festival because I wanted to see for myself the progress made by you in the past twenty years. Today we heard from Lakshamma who told us that she grows six different types of crops, it is to make sure that if one crop fails to thrive, there will be others that grow and yield the millet for the family. We heard from you the experts how fallow land has been put to use to grow millets because it does not need a lot of water and the grain is very nutritious. The booklet produced by the Millet Network tells us the nutritive value of the food. Perhaps you may not realize that many of the vitamins are particularly good for women during their pregnancy. For example some millets are very rich in folic acid. Lack of this vitamin in the diet resulted in spina bifida amongst many women before people realized its importance. Folic acid gets destroyed during the processing of flour - that is why the flour in Canada is fortified with folic acid now. Besides vitamins, millets are rich in so many essential components like protein, fibre etc. You use every part of the plant supplying fodder to the cattle and food to the family. We heard today from another speaker how monoculture depends on high inputs with chemical fertilizers and pesticides.

We have to remember how the government plan that supplied wheat from the USA made us dependant on wheat and rice and we stopped eating grains like millets. It benefited the US farmers who were not able to sell the wheat they produced. We were told that we were getting aid from the US but in reality they were selling the wheat and making us dependant on wheat because our eating habits changed and we forgot all about the wonderful grains that are native to India. We now face another threat. Climate change will affect our food supply. Satheesh told us how cultivation of food has gone down dramatically as people switch to growing cash crops. This increases dependence on others for food production. Your approach to farming uses natural fertilizers and natural methods of pest control. This is important in organic food certification which the Sanghams have adopted. This is what food sovereignty is all about. We have to use food production methods that are sustainable and in the hands of those who till the land and not big agri-businesses who do not care about the quality of the food they produce.

That is why Inter Pares supports the work of DDS, the Millet Network, and the Mobile Biodiversity Festival. I am proud to say Inter Pares is a feminist social justice organization. They strongly believe in food sovereignty. DDS has been an inspiration to Inter Pares and to people around the world. Inter Pares have facilitated learning exchanges to India bringing people from Canada, Burma, and several countries in Africa, through the COPAGEN Network to share the amazing accomplishments of  marginalized women farmers and developing sustainable and citizen-controlled food systems – for the well-being of their communities and land.

As you heard today, you offer many lessons to policy makers, scientists and members of the international community who seek to eradicate extreme poverty and hunger while ensuring environmental sustainability. This also resonates with people concerned with climate change, because your method of food production offers a climate cooling agriculture and a model to follow.

DDS has understood that working with Sangham women farmers not only helps women but the entire community. DDS also recognizes that farmers are the experts; they have knowledge, expertise and wisdom that needs to be listened to and guide rural development efforts.  This is shown in the bottom-up, farmer-led research that DDS has conducted on Bt Cotton - which served as a model for similar farmer-led research in West Africa.

We congratulate DDS and the women from the Sanghams on another successful Mobile Biodiversity Festival; we are honoured to be part of such an event that recognizes the tremendous work and commitment of women farmers in India.

Inter Pares, which means amongst equals, is committed to continue to support the work of DDS, not for two years, five years, but for the next twenty years so that the biodiversity festival will continue to spread the message that we need to hear again and again.

Thank you again for giving me the opportunity to say a few words and recognizing that it is not just “ek aur anek” (one, many) but most importantly it needs “Ekta” (unity) to change the world. 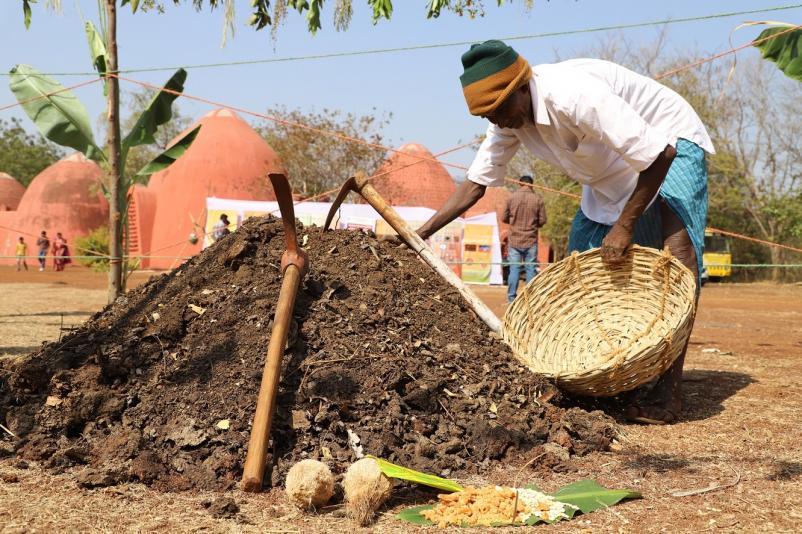