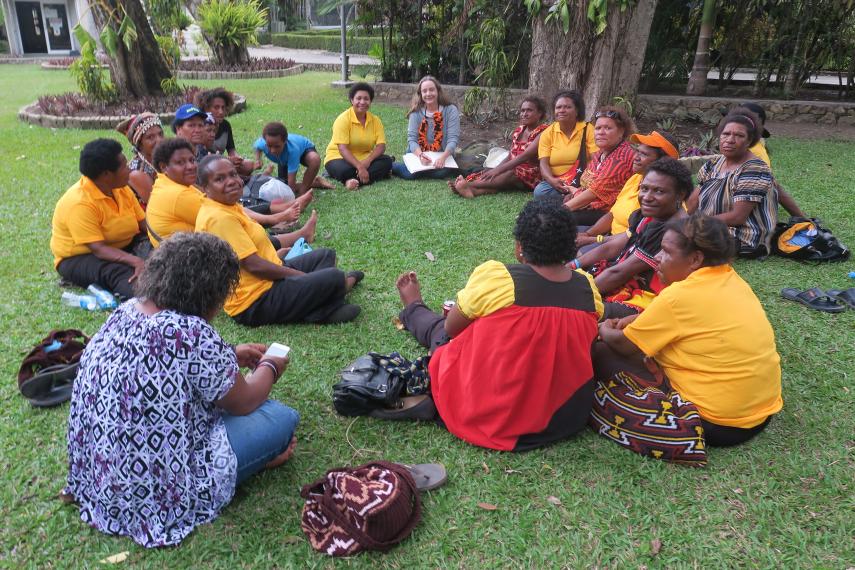 Fear. Violence. Rape. Broken promises. These are the dividends from an economic system that values private profit for a few, over public good for the many.

In 2006, Canadian mining giant Barrick Gold acquired the Porgera mine, an open pit gold and silver mining operation in Papua New Guinea. Like other mining companies, Barrick hired private security and contracted public police forces to guard the mine site. Like at other mine sites, these security forces have abused their power, gang-raping local women and shooting villagers they consider trespassers, resulting in maiming and death. In the face of a much-delayed grievance mechanism internationally criticized as unjust and inadequate, over a hundred courageous women survivors of sexual abuse have organized to demand restitution.

The relentless pursuit of profit can create insecurity and fear, and it is often women who have to pay the price – through economic insecurity, conflict and dangerous work conditions. And in too many countries, the rampant and superficial pace of economic growth masks a very high rate of gendered inequality. A lack of economic power often correlates to little political power. A feminist analysis must question an economic system where growth and profit are sought above all else, and where this system oppresses rather than liberates. A “feminist economic model is based on sustainability, equality and social, economic and cultural rights for all, in both the formal and informal economy.”

Through financial support, accompaniment and political advocacy,Inter Pares supports organizations that are working to change these hierarchical and unjust power dynamics. One example is the Deccan Development Society (DDS),Inter Pares’ counterpart in India, which has facilitated rural women’s organizing through “sanghams.” These groups work  to collectively build and share knowledge about agro-ecology, a type of farming that is biodiverse, resilient, self reliant and economically transformational. Through sharing techniques and seeds, women resist corporate control over farming inputs, including seeds that are genetically engineered. These women are able to earn a livelihood; they are able to send their children to school; they are able to build a life that is economically secure.

Inter Pares’ counterpart MiningWatch Canada monitors Canadian mining interests around the world, including the Porgera Mine in Papua New Guinea. MiningWatch Canada lends its support, expertise and solidarity to those who have experienced harm, particularly affected women and their families.

Beyond documenting and supporting individual cases, MiningWatch Canada also works to advocate systemic solutions. Together with them and others, Inter Pares co-founded the Canadian Network on Corporate Accountability (CNCA) whose mandate is to propose and advocate for laws and policy reforms that ensure Canadian extractive companies are held to strong human rights and environmental standards. CNCA was instrumental in the 2018 creation of the government’s Ombudsperson for Responsible Enterprise, an office that will be tasked to investigate “allegations of human rights abuses linked to Canadian corporate activity abroad.”

A feminist analysis must question an economic system where growth and profit are sought above all else, and where this system oppresses rather than liberates.