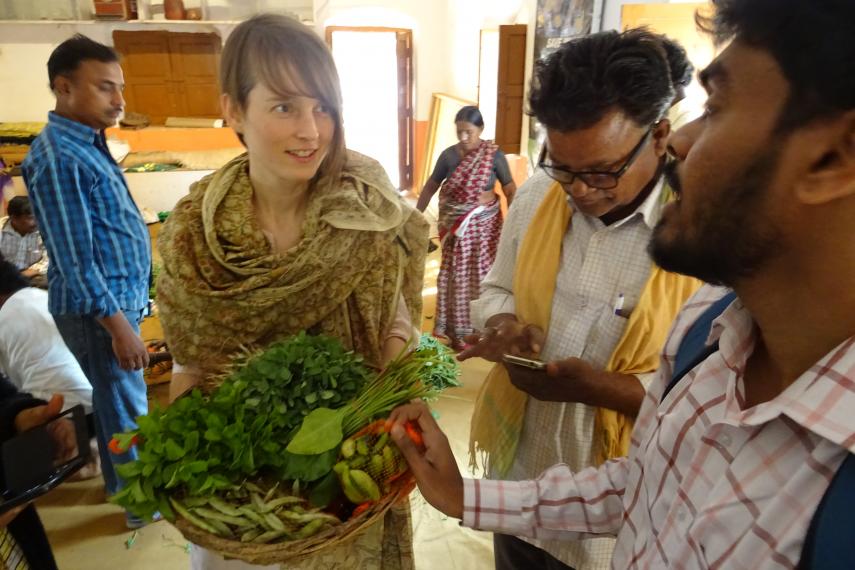 Inter Pares works with farmers’ and rural women’s organizations practicing agroecology (agriculture that respects ecological principles) and building local and sustainable food systems. To bolster these grassroots efforts, from 2012 to 2017 Inter Pares organized a series of four exchanges that brought together farmers and rural women leaders from Canada, the West African biodiversity coalition COPAGEN, and the Deccan Development Society (DDS) in India. In February 2017, staff members Samantha McGavin and Eric Chaurette travelled to Telangana State in India for the latest of these exchanges.

We are greeted by the fragrance of freshly cut mint as we enter the room. In a large circle, women are carefully bundling and weighing fresh vegetables and herbs and placing these into woven baskets, soon to be whisked off to Zaheerabad and Hyderabad. As the sunlight pours through the windows, the collection of tomatoes, fresh greens, and a not-so-surprisingly large amount of chili peppers are a delight to the eye. These baskets will be distributed to 250 families, all part of DDS’s popular Sangham Vegetables initiative. We learn that another 350 families are on a waiting list.

Only three years before, Inter Pares facilitated an exchange that brought farmers from Senegal and Burkina Faso and a Canadian farmer, Maude-Hélène Desroches, to India to share and learn with DDS. It was during this exchange that Maude-Hélène shared how her farm, Les Jardins de la Grelinette, grows enough vegetables on 1.5 acres of land to feed 250 families via a weekly basket delivery. Her presentation obviously made an impression, as the Quebec-pioneered model of Community-Supported Agriculture has now taken root in Telangana.

The sharing of knowledge was not unidirectional however. Maude-Hélène was deeply impressed by the diversity of seeds the DDS women had at their fingertips, and left India with the conviction to start saving her own vegetable seeds.

Sam and I are here to lead an exchange focused on what can be described as “women-led agroecology.” Joining us are four inspiring women from COPAGEN: Fatou Sow from Senegal, Sábado Vaz from Guinea-Bissau, Kadidja Koné from Côte d’Ivoire, and Aïssatta Yattara from Guinea. For more than three decades now, DDS, working with mostly Dalit women, has transformed a region of hunger and drought into a region of biodiversity and bounty. The DDS approach is straightforward: establish strong women’s organizations (sanghams), build agricultural systems that rely on local biodiversity and knowledge, and link rural production to local and regional markets to foster greater access to nutritious foods. COPAGEN has replicated the DDS model of women-led agroecology in West Africa, where women’s collectives are cultivating and transforming local crops such as fonio, millets, niébé (cowpea), sorghum and yams – and where market demand for these local foods is growing.

We are led out of the room and to a courtyard, where sangham women give us a demonstration of how they make decisions on what crops to plant and why. Through a participatory exercise, the women debate the respective qualities of different crops, and their multiple uses. We are seeing cost/benefit analysis, risk mitigation, climate adaptation, and nutrition planning, all being discussed in real time. As the conversations unfold, the knowledge behind these decisions is shared among the group, increasing collective knowledge and passing this knowledge from generation to generation. The display of their expertise is mesmerizing as we consider that these women, once marginalized by caste, are now leaders in their community, and farmer role-models globally.

At the end of the exchange, we share some final thoughts on all the things we witnessed during the week. Fatou sums it up for us: “Beyond the friendships and solidarity that has been created here among us, this exchange has convinced us that a person, whether she is a man or a woman, who becomes conscious of her capacities, can be a true agent of change.”

“Beyond the friendships and solidarity that has been created here among us, this exchange has convinced us that a person, whether she is a man or a woman, who becomes conscious of her capacities, can be a true agent of change.”