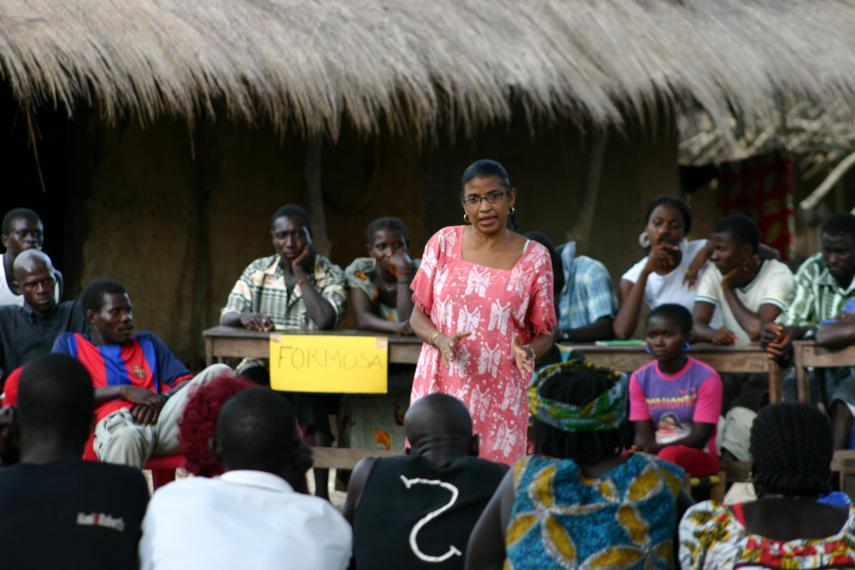 Forty-five years ago, a group of young Canadians with a passion for global peace and justice returned home from volunteering overseas, disillusioned but motivated. Their experiences revealed how foreign aid actually undermined local grassroots organizations in the Global South, imposing ideas of “development” that were based on Eurocentrism and white supremacy. Rather than supporting local activists in their own context, aid often recreated colonial power dynamics and exacerbated inequalities.

And so, inspired by anti-colonial struggles, feminist consciousness-raising, and community organizing, they founded a new type of social justice organization: one that united activists in Canada and the Global South to work for change inter pares, or “among equals.”

Inter Pares still aspires to uphold that principle for which we were named. We work with counterparts – grassroots organizations in Africa, Asia, Latin America, and Canada – in long-term, political relationships built on mutual respect and common cause. We view our counterparts as activists and experts on their own local context, and embrace their leadership in our collaborations. By working in Canada, Inter Pares also recognizes the injustices within our own borders. Our approach is not one of charity, but of profound solidarity.

As Canadians, many of the resources and privileges we enjoy have been gained through exploitation, within and beyond our borders. Our solidarity with our counterparts strives to address the global political and capitalist power Canada wields at the expense of others. For example, through MiningWatch Canada and the Canadian Network on Corporate Accountability, we work with allies in Canada to hold the Canadian government and extractive industry accountable. This work was instigated by counterparts in Nicaragua, Ghana, and the Philippines, who, decades ago, highlighted that the community initiatives we supported were undermined by Canadian mining companies. Similarly, two years ago, when we heard from our counterpart in Burkina Faso, COPAGEN1, that a predominantly Northern consortium was imposing an unsafe and unproven technology — namely releasing genetically modified mosquitoes — without community awareness and consent, we supported counterparts’ own research and advocacy efforts.

When we raise funds for international counterparts, we are doing what we can to redistribute resources that have been unfairly concentrated in the Global North. Still, colonialism, and by extension racism, are ingrained in the systems in which we must operate. Despite Canada’s creation of a Feminist International Assistance Policy, the government mandates that we “direct and control2” the funds with which we support our counterparts. As a registered charity, Inter Pares is required to act as if local counterparts are devoid of agency and simply implementing our programs. Ultimately, such restrictions are not about accountability, but express a fundamental mistrust of communities in the Global South – mistrust that is still based in Eurocentrism and white supremacy. At Inter Pares, we see our long-term relationships with counterparts at the heart of a reciprocal approach to accountability. We are advocating for aid structures and a comprehensive feminist foreign policy rooted in solidarity and equality.

There is much more to do. We cannot achieve social justice without dismantling colonialism and racism. It is only once we co-create new systems based on trust, local agency, justice, and solidarity that we can, in every sense, work inter pares.

2. “Direction and control” is a term used by the Canada Revenue Agency.

When we raise funds for international counterparts, we are doing what we can to redistribute resources that have been unfairly concentrated in the Global North.