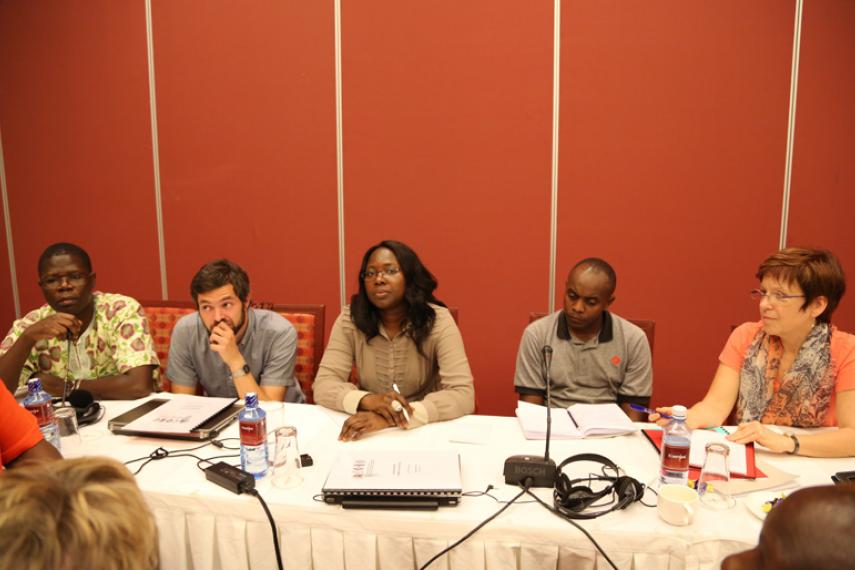 The Forum, organized by our long-term counterpart ACORD, brought together 47 African and international social justice activists and workers to develop action plans for ACORD’s contributions to transforming the economic, social and political structures that create and maintain inequality in Africa.

‘Is Africa Rising – or is Africa Bleeding?’ asked Aidan Eyakuze, the keynote speaker at the Forum. And rightly so. Here is why.

In the past decade, many countries in Africa have experienced rapid economic growth. But while the economic indicators are showing progress, they hide the fact that the vast majority of Africa’s people are not benefiting: most of the growth in Gross Domestic Product (GDP) is from the export of raw materials, and few jobs are being generated. So the significant growth in GDP has been largely accompanied by increasing inequalities in income, wealth and access to social services.

Ironically, this is especially the case in countries rich in natural resources, where profits for international corporations and a small African elite are soaring, but wages for workers are stagnant. And where inequalities are growing, vulnerability to conflict and natural disasters worsen, social cohesion is weakened and insecurity exacerbated.

During this forum, ACORD’s partners – including Inter Pares, Pan-African civil society organizations, governments, international donors, local community representatives and like-minded actors from within and outside the African continent – discussed a vision of structural transformation that incorporates concrete changes in order to foster inclusive and sustainable industrialization.

Participants exchanged views on African economic diversification through public investment, ecologically sustainable people-centred agricultural policies with an emphasis on small farmers, and on countries’ capacities to feed themselves. They agreed that these must be considered with fair and progressive tax regimes, a commitment to curb corruption, as well as measures to stop the illicit flow of millions of dollars out of Africa through the use of tax havens – largely perpetrated by extractive industries.

Reaching these goals will require the political will of governments in Africa. But it will also require countries like Canada to insist on changes in the international trade and financial systems. At the moment, these systems hamper the efforts of African and other governments in their ability to transform domestic economic policies, even with all the political will in the world.

About ACORD
ACORD is an Africa-led international organization working with people living on the margins of society to exercise their rights and improve their livelihoods. ACORD has program offices in 17 countries across Africa and collaborates with African and Northern organizations to mobilize resources and support for local economic and social development, research and training, as well as advocacy for more equitable relations within and among communities.