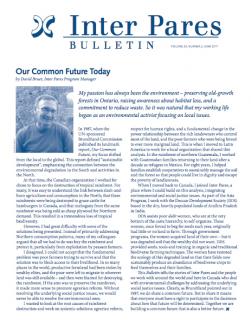 In so many places in the world, productive farmland had been stolen by wealthy elites, and the poor were left to migrate to wherever land was still available – and then were blamed for destroying the rainforest. If the aim was to preserve the rainforest, it made more sense to promote agrarian reform. Without resolving the underlying social justice issues, we would never be able to resolve the environmental ones.

Natural riches are at the very root of the violence, poverty, and conflict that has plagued Chiapas for decades. Despite abundant natural resources – water, mineral, genetic biodiversity – the indigenous communities of Chiapas live in stark poverty. They are pushed out of political decision-making by the economic and political elite, and seen as an obstacle to the tremendous profit that could be gained here.

The right to live in a healthy environment is protected under the Quebec Charter of Rights and Freedoms and under international human rights law, notably the International Covenant of Economic, Social and Cultural Rights. Shale gas exploration and exploitation require large amounts of water and the use of toxic chemicals, posing a serious risk to human life in the event of contamination.

A culture of caring

June 2011 marked the 20th anniversary of Tiniguena, an organization in Guinea-Bissau dedicated to the preservation of biodiversity through citizen action and cultural emancipation.

Burma is located in a biodiversity hotspot, recognized globally for richness in flora and fauna, but controlled by a military junta. Most of the natural resources are in conflict-affected areas where coercive control is maintained, including burning down villages, surrounding development projects with landmines and conscripting villagers to build infrastructure. The unregulated exploitation of Burma’s resources has caused increased militarization and massive human rights violations, and has had devastating consequences for the environment.