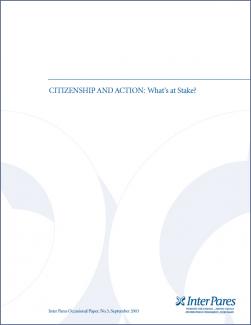 The question posed by the organizers of this day, and for the week is “What’s at stake in social change activism?” “What is the urgency?” And, “What is possible?”

This question came out of intensive planning meetings as far back as last October when the Institute team grappled with the challenge of revitalizing the Summer Program. After ten incredibly successful years, they wanted to scrutinize and revitalize, to build on what had been achieved and to remain relevant. Most importantly, they wanted to ensure that this annual program remained rooted in the daily lived concerns of the citizen activists and community workers who participate in the program from across Québec and Canada, from the United States – and from even further afield, as the circle of friends has broadened. This process is described inside the front cover of the program booklet, and reflected in the amazing range of seminars described there.

I have to acknowledge at the outset a problem of nuance around this word “activist”. The most common interpretation I hear en français for the English word activist, is “militant,” although increasingly in some quarters I hear the anglicization, “activiste.”

By activist what I mean is an active, engaged citizen committed to working in society to promote progressive change to improve the general quality of life. The defining quality is engagement, so an activist is someone intensely engaged as a citizen in the social, cultural and political life of her community. The essence is – to introduce a third language – protagonismo. An activist is a protagonist in society, someone who actively promotes the concrete realization of a vision of the way her society can be.”