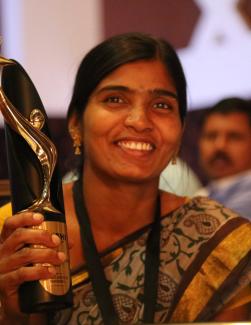 This 5-minute video, produced by the Community Media Trust of the Deccan Development Society (DDS) in India, contrasts the great benefits to small-scale farmers of ecological agriculture compared to input-intensive monoculture and genetically engineered crops.
The video presents Meedoddi Vinoda, a successful 30-year-old farmer who is a member of DDS. Like other members, she practices biodiverse agriculture with no fertilizers, pesticides, or irrigation. In 2015, she earned 200,000 rupees on her 3-acre plot despite a drought, and in April 2016 won the Excellence in Farming Award due to her impressive profit margins. Her neighbour who planted 3 acres of Bt cotton, a genetically modified input-intensive crop, earned less than 10,000 rupees.