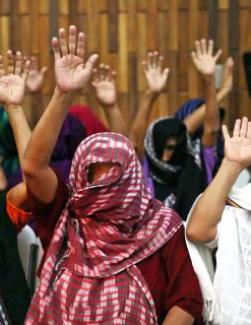 Hands raised in acknowledgement of the support the Sepur Zarco women felt, and in victory.Credit: EPA

Although most of the region's armed conflicts have ended, levels of violence in general and violence against women in particular remain extremely high in Latin America. Indeed, 'femicide', the crime of murdering females because of their gender, is a leading cause of death among young women in countries including El Salvador, Honduras and Guatemala.

In his testimony, Bill shared some developments from the region that highlight the importance of enhanced support to the women, peace and security agenda, and presented five recommendations to the committee.