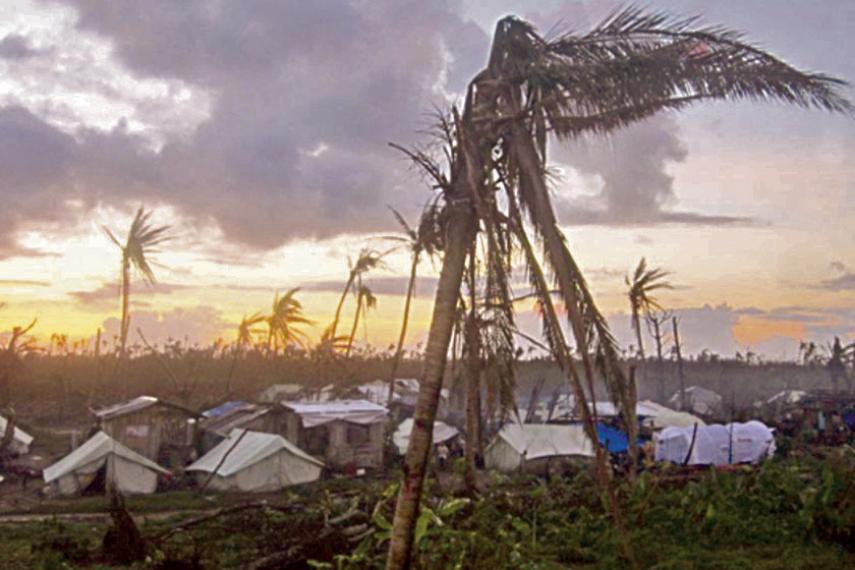 We have learned so much from the decades of organizing that only Inter Pares had the vision and courage to support. The organizers we have are priceless!

On November 8th, 2013, the worst typhoon in the history of the Philippines struck its eastern coast. Punishing winds pummelled homes, uprooted trees and devastated infrastructure. Entire areas were flattened. Waves as high as two storeys belted the islands of Eastern and Western Samar, as well as Leyte. In the days that followed, the world was awestruck by images of the aftermath. The typhoon affected 11 million people and left over 6,000 dead.

For Iday Simbajon, a community health worker living in Metro Manila, the situation was personal. Her mother, one son and other relatives lived in the heart of the affected area. As soon as she could and against the advice of friends, Iday made her way to find them. Her family home had been destroyed, but thankfully, her family members were all alive and well, living in a makeshift cardboard hut as temporary shelter.

Two of her colleagues working in Eastern Samar were not so lucky. Tessie Azura perished from a stroke in the aftermath of the storm. And Ernie Gariando, caught in the storm after assisting his elderly parents escape to an evacuation site, was deeply affected by post-traumatic stress.

Iday, Ernie and Tessie were community health workers with Likhaan, a women's health organization supported by Inter Pares since its inception in 1995. In response to the typhoon, Likhaan deployed a team of its most skilled workers to affected areas. These community health workers brought knowledge of the local context, specialized clinical skills, decades of organizing experience, a critical feminist perspective and incredible motivation. Likhaan's domestic response was both novel and complementary when compared with more common international humanitarian relief practices.

When disaster strikes in places like the Philippines, international aid often floods in to assist those in need. The complexities of such operations are immense: coordination, protection of the vulnerable, consultation with all levels of authority and the local population, and building in plans for long-term sustaina- bility. The Likhaan team was knowledgeable of all of these issues. In consultation with local authorities, the health workers determined which 23 barangays (communities) most needed their help, and set to work.

The Likhaan team offered counselling to battle the grief they encountered. They trained communities in negotiating with local authorities to ensure basic needs were met, over both the short and long term. They assisted in the establishment of community gardens, which improved food security while deeply nourishing the spirit. Likhaan responded to the reproductive health needs of women by offering family planning services and supplies. The health workers mobilized hundreds in rebuilding their own communities. But what was most profoundly appreciated was the sisterhood and solidarity of the health workers. It was a remarkably effective response in the face of disaster, constructed upon Likhaan's decades of skill, knowledge, wisdom and experience in organizing with the urban poor in Metro Manila.

At Inter Pares, we are honoured to have supported Likhaan's community health workers over the long term. And Iday, with her skill, heart and leadership, accepted another placement in Eastern Samar, profoundly gratified that she was able to use her capacities for rebuilding, for hope and for inspiration after such incredible loss.