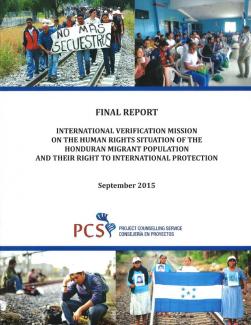 Honduras has seen dramatically increased levels of migration since the country's 2009 coup. Every year, 80,000 to 100,000 undocumented men and women leave the country, out of a population equivalent to that of Quebec. The country is rocked by violence, but in the absence of an official war, Honduran migrants are deemed “economic migrants.”

Once outside the country, Hondurans’ rights are regularly violated throughout their journey. Across Central America and Mexico, migrants are persistently subjected to theft and extortion. They are assaulted, kidnapped, beaten, and are victims of smuggling, trafficking, assassinations, forced disappearances and even massacres. Women are also raped and sexually assaulted.

In order to shed light on this under-reported situation, PCS organized a delegation of six international experts to investigate the situation of Honduran migrants. Taking their report to national and international authorities in the summer of 2015, PCS helped reveal these horrendous realities, pressuring local governments and international institutions to address those issues.