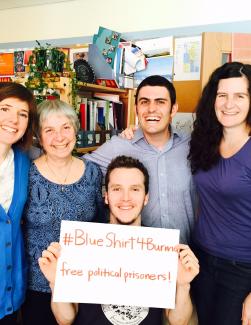 Tuesday April 21st will be the first annual #BlueShirt4Burma day, in solidarity with political prisoners still in jail.

The day marks the anniversary of the death of U Win Tin. Co-founder of the National League for Democracy, and one of Burma’s longest serving political prisoners, U Win Tin famously refused to change the colour of his prison-blue shirt after his release in 2008.

“If there are no political prisoners … I will take off my shirt but up until now I haven’t seen good indications.”  U Win Tin

The #BlueShirt4Burma campaign is calling for fundamental reforms to the Prisoners of Conscience Affairs Committee, to ensure that all political prisoners are released unconditionally, compensation is given to former political prisoners, repressive laws are repealed, and civil society is involved and informed about the work of the Committee.

On April 21st, you can participate by wearing a blue shirt or clothing, taking a picture of yourself, and posting it to social media using #BlueShirt4Burma. Please encourage your friends, colleagues and MP to wear blue too!