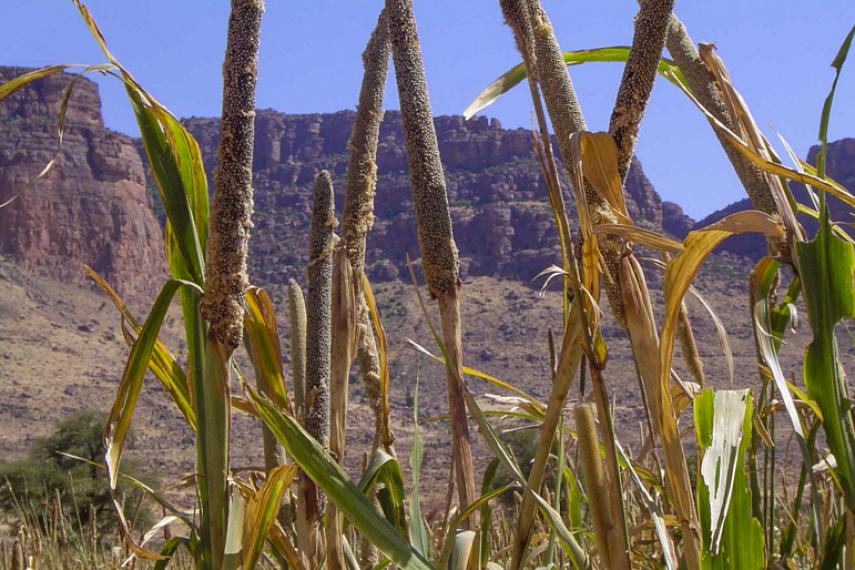 Millet : a traditional food crop consumed all over the world.Credit: Eric Chaurette

In 2009, when Inter Pares staff member David Bruer was in India to visit our counterpart the Deccan Development Society (DDS), they gave him a T-shirt that proclaimed him an advocate for the “miracle of millets.” David was a bit skeptical. Sure, millet is good – the traditional food crop for many people in dry climates – but miraculous?

Farmers throughout large areas of Asia and Africa were once major producers of millet, but as governments adopted Green Revolution technologies, the emphasis was shifted to rice and wheat production. Millet was relegated to the status of the crop for the poor, one that “civilized” people did not eat. Yet millet is far more nutritious than rice or wheat and doesn’t require such high levels of chemical fertilizers or irrigation. Growing millet also has other benefits, serving as animal fodder, fencing and roofing, and improving soil fertility and carbon sequestration.

In 2008, at the height of the global food price crisis, Inter Pares was able to respond to DDS’ request for start-up money to convene farmers, environmentalists, academics, and policy makers in India for a national consultation on millet. This led to the creation of the Millet Network of India (MINI), which now has membership from 18 states and local chapters in five regions.

With Inter Pares’ support, MINI advocates for practical measures to promote millet. It has convinced some local governments to introduce millet in the public daycare and primary school meal programs. It has reached out to the media and the public through food festivals, films, radio shows, and recipe books. A key strategy was to ask that millet be included in the state food security system, known as the Public Distribution System, in order to guarantee stable prices and markets for millet producers. MINI also insisted on local sourcing to ensure that millet production not be taken over by industrial farmers, but rather that small-scale farmers across the country continue to have a market for their crops.

In response to the food crisis, India’s National Advisory Committee on Food Security, chaired by Sonia Gandhi, was tasked with looking at how the government should address food security. MINI was thrilled by the committee’s 2011 report, which recommended that millet should be included in the Public Distribution System and that the government establish a system for local sourcing of millet for their fair-price stores.

Of course the recommendations must be put into law and implemented, but enthusiasm is high and MINI is optimistic. The experience has shown that people coming together to advocate for change can make a difference – in fact, it can be miraculous.

The experience has shown that people coming together to advocate for change can make a difference.