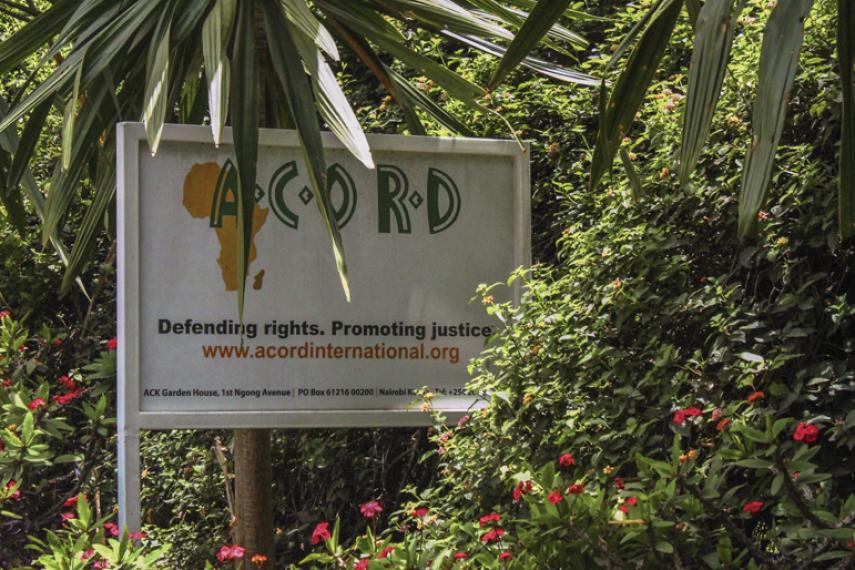 In May 2010, Annette Msabeni-Ngoye, Acting Gender Thematic Manager, from the Agency for Cooperation and Research in Development (ACORD), travelled from Kenya to Canada to share the results of a study on women and girls’ access to justice in cases of sexual and gender-based violence, entitled Making the Law Count. ACORD believes that addressing women’s equality and the rule of law are essential to ensure women’s well-being.

Once an invisible consequence of war, sexual and gender-based violence has now been recognized internationally as a weapon of war, a form of torture, and a crime against humanity. This is reflected in numerous international human rights instruments that give women and girls who experience violence a means to seek justice.

Despite this, ACORD’s study of judicial, police, and health systems in the Democratic Republic of Congo, Burundi, Tanzania, Kenya and Uganda, found that international protocols are either not integrated into domestic laws or that governments lack the political will or resources for their implementation.

Countries have not allocated the necessary legal and financial resources to ensure the protection of women and girls, especially those who are most vulnerable to violence due to conflict, displacement and marginalization. The result, Annette explained, is that women and girls who experience political violence during the war have little access to justice, support in their healing, or reparations.

Women and girls who survive sexual and gender-based violence rarely benefit from traditional justice systems – in which payment is made to the family for the harm done – and they often lack the psychological or medical support they need to heal and bring their case before the courts.
Police stations are ill-equipped to collect and store evidence necessary for court cases, and often hold discriminatory views of women and girls who have been raped.

“Police officers may even question the woman, asking her what she was wearing, and insinuating that it may have been her fault. Furthermore, there are few links between police stations and hospitals, which are supposed to gather evidence and offer women and girls medical and psychological care,” Annette explained.

The full autonomy of women and girls is fundamental to ending sexual and gender-based violence. Given traditional attitudes towards women and girls, working on the issue of sexual violence runs the risk of converting the issue to one of chastity, and protection of chastity, rather than of promoting their equal status in society.

In order to address violence, we must promote opportunities for women to exercise control over their own lives. For example, many survivors are turned away from their husband’s home. When women are able to own land, and not be defined as the property of their husband or father, they can at least begin to rebuild lives for themselves after experiencing such violence, stigmatization and rejection.

In the Great Lakes region of Africa, ACORD is building a movement to end all forms of violence inflicted on women by challenging impunity and bringing perpetrators of sexual violence to justice, while restoring the health and livelihoods of the survivors.

Through its grassroots networks ACORD mobilizes women’s groups, survivors of sexual violence, and civil society organizations to work with local leaders to not only punish crimes but address stigmatization and support effective compensation and reparation for survivors. They educate police forces and create gender units that respond to the needs of women and girls, train magistrates and judges so as to not re-victimize women and girls when they are giving testimonies, and work with the media to challenge violence and stigmatization in society in general.

Annette’s visit to Canada builds on the relationship that Inter Pares has developed with ACORD, and will help us draw links with our colleagues in Latin America and Asia who are working on similar issues so that we may learn and support each other, across borders, in advancing justice for women and girls.

The full autonomy of women and girls is fundamental to ending sexual and gender-based violence.