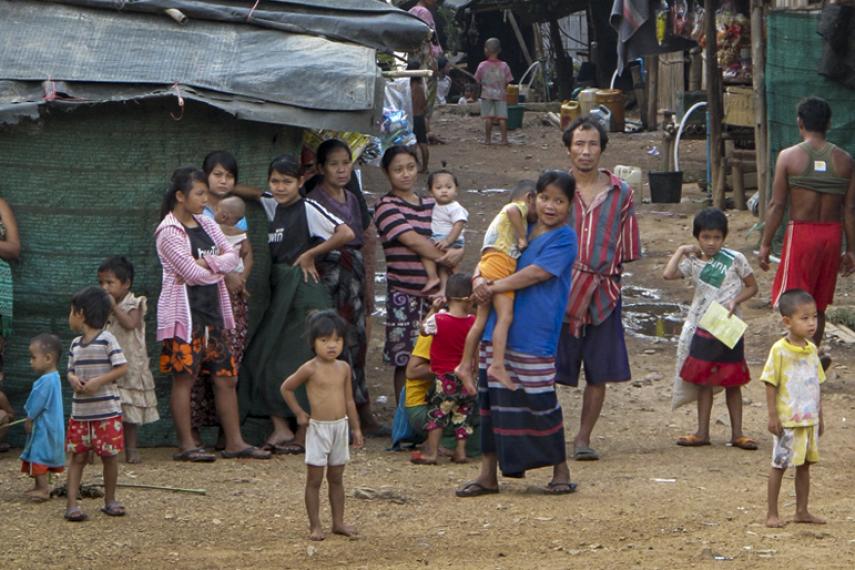 “We came because of oppression from the Burmese soldiers. We walked for twelve days, just sleeping by the side of the trails, under tents made of leaves. My wife was sick for two days, she couldn’t climb the mountain.” This is how 41-year-old Aung Htoo and his family joined 140,000 refugees from Burma sheltering in camps in Thailand. There are also refugees outside the camps, living among the estimated 2 million Burmese migrant labourers in Thailand. Several hundred thousand refugees from Burma can be found in India, Bangladesh, Malaysia, and China. Some have been refugees for over 20 years, others have arrived very recently. An estimated half-million internally displaced people are still in southeastern Burma - and if military abuses don’t stop, they might soon cross the border to become refugees too.

These daunting numbers are nothing new to staff of The Border Consortium (TBC), who have delivered all food and shelter aid to refugee camps in Thailand for the last 28 years. For much of that time, Inter Pares has contributed toward this massive task. During a recent visit to Ottawa, TBC Executive Director Jack Dunford thanked Canada for its consistent support at a time when reductions in European funding, exchange rate fluctuations, and rising commodity prices are forcing cutbacks in the food and shelter provided to already vulnerable people.

Almost unique among refugee camps worldwide, the camps in Thailand are built and run by refugees themselves through elected camp committees, supported and monitored by TBC. A 2009 CIDA evaluation found that “the model of refugee camp management adopted by TBC is one that promote[s] the self-reliance of displaced people through the utilization and development of their own resources, this with a view to preparing refugees for longer term solutions.”

TBC also provides food across the border into Burma to displaced people living in hiding who, not wanting to become refugees, are trying to grow food while evading forced labour and violent abuse by the military. TBC rice is delivered by community-based organizations from these areas, who are known and trusted by the displaced villagers. TBC helped these groups to develop innovative monitoring systems that have been studied as models for aid delivery in conflict situations worldwide.

Recent events in central Burma have led some observers to predict the imminent repatriation of refugees, but for most refugees the situation in their home villages has not actually improved. Human rights abuses and landmine contamination are still causing people to flee. The work of TBC is crucial toward ensuring that refugees can decide their own future, and that any who choose to repatriate can do so in dignity and safety.