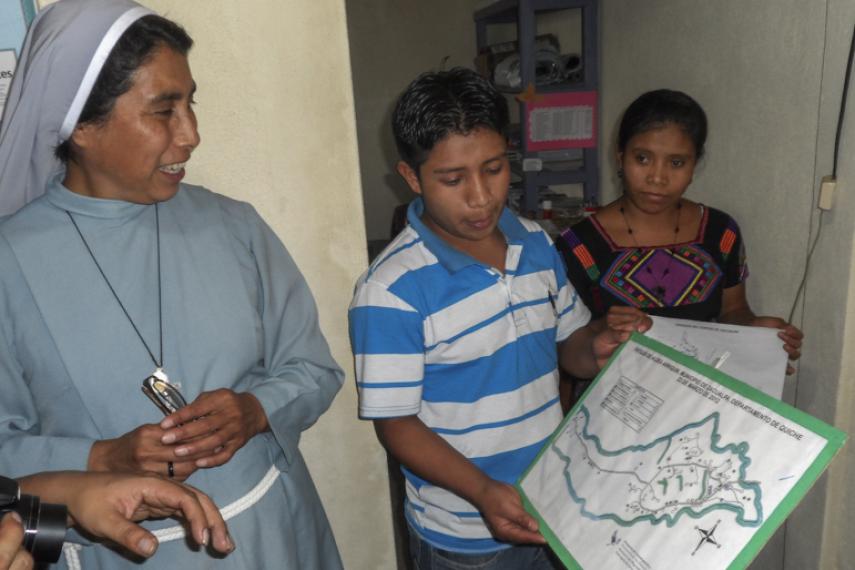 Office of the Migrant: Sr. Ana María Alvarez, the director, and José Daniel and Luisa, staff members, keep maps in the office to help family members understand where their relatives have migrated to, or where they are detained. Credit: Kathryn Dingle

In the town of Zacualpa, families used to be torn apart by the internal armed conflict. Today it is migration that separates families. Generation after generation, Indigenous K’iché families eke out a living, often toiling on land that was taken from them during the conflict and remains in the hands of wealthier families. This economic hardship drive scores of people to leave their relatives and children and to seek work in the North.

Inter Pares’ collaboration with our counterpart Project Counselling Service (PCS) has evolved with the changing realities in Guatemala. Historically, PCS’s program on forced uprooting dealt with displacement due to conflict. Today it focuses on the causes and effects of migration. This is why we now collaborate with the Office of the Migrant, an initiative of Zacualpa’s Catholic church. Two bright young local staff, José Daniel Gonzáles and Luisa Martínez Hernández, attend to the community.

The Office of the Migrant has played a significant role since it opened in 2010. By organizing public fairs and rallies about migration, it has placed a critical spotlight on the topic. Youth perform short plays showing the perils of the dangerous journey north and the discrimination migrant workers commonly face. This lifts some of the secrecy around the issue, as well as the shame felt by families left behind and migrants who have returned to Zacualpa.

Previously, people were told mostly of lo bonito, that is, the good sides of migration: high wages, remittances, the American dream. But the Office’s activities challenge a persistent myth about migration – that the benefits far outweigh the risks. All this contributes to open, honest, and informed conversations, and a fuller understanding of migration.

The less-public work of the Office supports families that are trying to track down missing or detained relatives. It compiles locations and contacts for detention centres across the United States, and collaborates with migrant solidarity networks to make contact with those being held. There are also times that Daniel and Luisa must support families through the difficult and heartbreaking task of repatriating loved ones who died en route to their destination.

Inter Pares, PCS, and the Office of the Migrant are part of a network of organizations working for the reform of migration policies in Guatemala and destination countries, including Canada, as well as challenging the structural causes of migration. People have the right to move but there should also be alternatives. And when individuals make the decision to migrate, it should be with full awareness of the risks, pros and cons.

The Office’s activities challenge a persistent myth about migration – that the benefits far outweigh the risks. All this contributes to open, honest, and informed conversations, and a fuller understanding of migration.