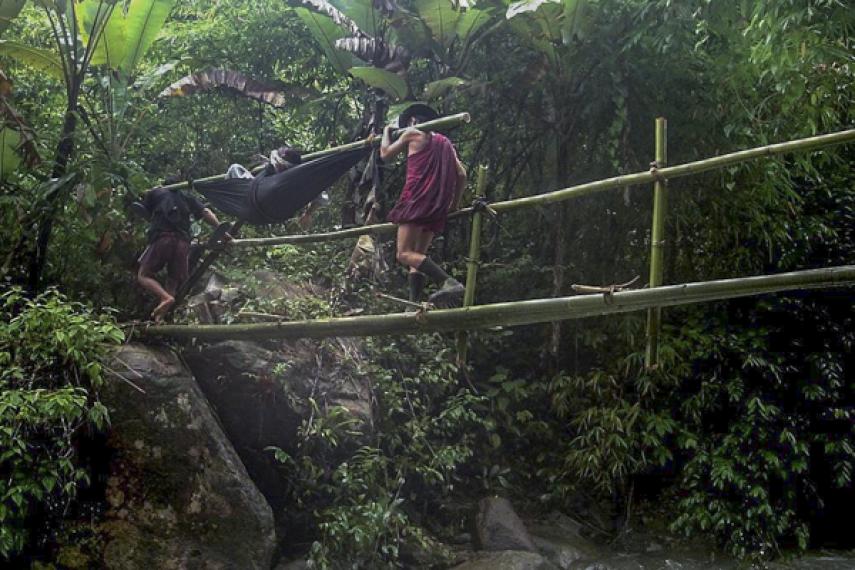 Trekking on slippery small paths and crossing swollen rivers, Hser Mu Na Htoo and her team of five health workers traveled for ten hours over strenuous terrain. Near their destination, the team kept in close walkie-talkie contact with the village leader, to make sure the Burma Army troops had not occupied the village since their last visit. The team arrived at sunset and slept that night in the homes of their aunts and uncles, friends and cousins.

The team awakened early to begin treating 26 patients for a variety of conditions, including diarrhea, malaria, and acute respiratory infection, and providing patients with counselling to ensure they understood their condition and treatment. In the afternoon, with the help of a village health volunteer, the team taught a nutrition and personal hygiene class at the school, and distributed vitamin A and de-worming medication. That evening, the community’s traditional birth attendants and health volunteers shared records of health activities since the team’s last visit. Hser Mu Na Htoo then slept, for she would need to wake at sunrise for another day of treatment, care, and education.

This was an average day at work, as described by Hser Mu Na Htoo. She and the health workers, volunteers, and traditional birth attendants form one of eighty-five Back Pack Health Worker Teams (BPHWT).

Government health services are virtually non-existent in rural Burma and international aid agencies have little to no access to most of these areas, particularly in the conflict zones. Preventable and treatable diseases continue to cause the majority of deaths. The BPHWT is one of several community-managed healthcare counterparts in our Burma program; together they provide healthcare to just over half a million people.

In October 2010, the BPHWT and several other counterparts released a joint report on the living conditions in conflict-affected areas. Based on surveys of nearly 28,000 people, Diagnosis: Critical presented a disturbing picture, with health indicators among the worst in the world. At the time of the survey, one in 14 women were infected with the most dangerous form of malaria and 60 percent of deaths of children under five were from preventable and treatable diseases.

Diagnosis: Critical presented compelling evidence linking health conditions with the absence of government healthcare, the protracted conflict, and the widespread abuse of civilians. In a country where national data collection and research is officially prohibited, the report’s vast collection of data is essential to any planning for future healthcare.

Our counterparts, and the health workers trained by them, continue to provide the most qualified, trusted, and effective healthcare available to many villagers. In the future, these groups will be the most appropriate advisors and collaborators to help establish Burma’s first national public health care system.

Inter Pares has supported Back Pack Health Worker Team’s primary health care provision since it began in 1998. The team has initiated talks to envision a national health system.