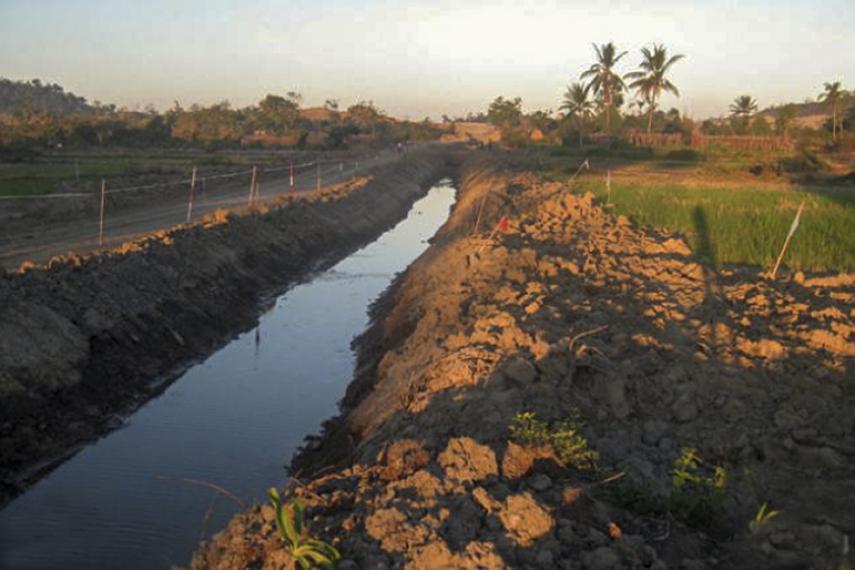 Burma is abundantly rich in natural resources. Large teak forests cover the mountains; gold, jade, rubies, and copper are a few of the precious minerals that lie beneath the earth; powerful rivers carve through the land; and just off the south-western coast, there are massive natural gas reserves. Despite Burma’s wealth, official figures conservatively estimate that a third of the population lives in poverty.

Decades of corruption and mismanagement have left Burma’s military generals wealthy and the economy a disaster. The country’s system of multiple exchange rates has created a fiscal black hole. Revenue from the oil and gas sector, for example, is recorded in the public accounts at the official exchange rate of about 6 kyat to the dollar, while the actual street rate is about 800 kyat to the dollar. The difference between the two rates is left untraced.

In recent years, the generals recognized the potential in natural resources and began devising mega-projects to extract these resources with regional investment. Most of these projects offer short-term gains for the generals, long-term access to resources for neighbouring countries, and treacherous impacts on local communities.

The Shwe gas project is just such a development project. In December of 2003, gas fields off the coast of Arakan State in Western Burma were discovered. These fields, known as Shwe (the Burmese word for gold), are expected to have one of the largest gas yields in Southeast Asia. After years of negotiations, subsidiaries of China’s national petroleum corporation secured the sole purchasing power and the rights to build two parallel pipelines across the country. The pipelines will transport both Shwe gas and shipments of oil from the Middle East and Africa – 2,800 kilometers of pipelines diagonally cutting across the country. Construction of various project components to extract, process, and export the gas is now well underway by a consortium of Chinese, South Korean, and Indian companies. The Shwe fields will be Burma’s largest single source of foreign income – to the benefit of the generals.

Wherever there are large resource extraction projects in Burma, local communities have seen a major increase in the militarization of the area and an accompanying increase in human rights violations. Research by community organizations in Burma with which Inter Pares works has found evidence of land confiscation, forced labour, and far worse. When the Shwe project was announced, predicting an absence of local benefit and an increase in human rights abuse, a number of community organizations and individuals came together to form the Shwe Gas Movement (SGM). Inter Pares provides financial support to this movement, which promotes respect for human rights, environmental justice, and revenue transparency in the oil and gas sector in Burma.

In September of 2011, SGM launched a report entitled Sold Out which documents the human rights violations that have already taken place. The report notes that battles between armed groups and the government have broken out near the pipeline route. It also details the vast unmet need for electricity and employment within the country. The report concludes that until genuine development can be achieved – development that protects the environment and the rights of communities, brings local benefit, and uses transparent and accountable mechanisms – the project must be suspended and all financing frozen or divested.

Many Canadians do not know that their contributions to the Canada Pension Plan are invested in corporations involved in the Shwe Gas project. Many of these corporations are named in a recent report, Broken Ethics, by Earth Rights International, which documents their complicity in human rights abuses in Burma. Inter Pares and others have repeatedly called on the CPPIB to use ethical investment screening, but our pension plan dollars continue to be invested in corporations such as those involved in this project. We believe that respect for human rights and the environment is a higher priority than a small percent return on an investment that is causing so much suffering.

The Shwe Gas Movement has launched a global campaign asking pension funds to sell their shares in companies involved in this project. The Canadian Friends of Burma, an Inter Pares counterpart, is leading this call here in Canada. The provincial financial ministers have the capacity to call on the CPPIB to divest, if they are motivated to do so.

Learn more about the Shwe Gas Movement and the pipeline project.

Despite Burma’s resource wealth, official figures conservatively estimate that a third of the population lives in poverty.