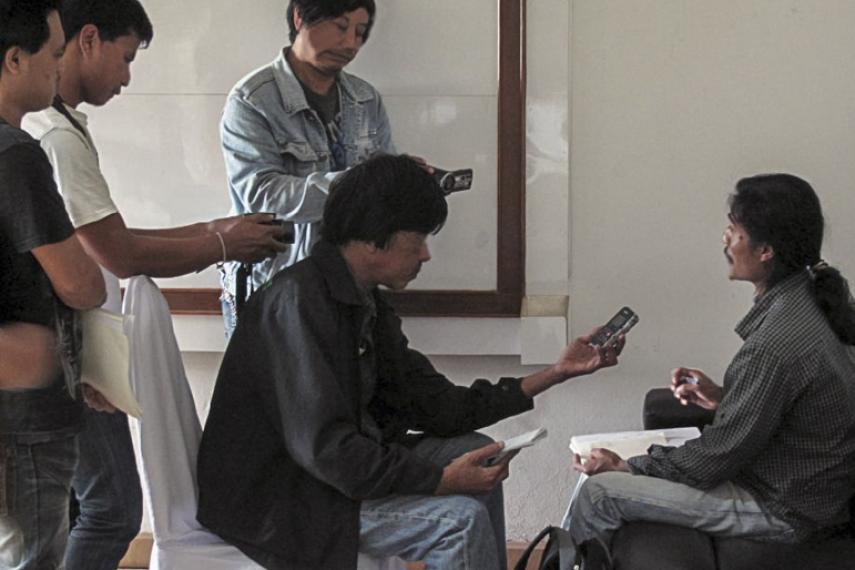 Informing the public: Arakan Oil Watch Director, Jockai Khaing, being interviewed by journalists including our media partners. (Note that faces have been altered.) Credit: Rebecca Wolsak

“Despite development projects during ceasefire time, the people of Kachin State did not develop; in reality, they were losing their human rights day by day.” Tsa Ji from the Kachin Development Networking Group (KDNG) wrote this statement in the group’s May 2012 newsletter. At the time, war raged on in Burma’s Kachin State while many other ethnic states had entered into peace talks.

Kachin State had lived under a ceasefire agreement for 17 years – but during that time unemployment soared, the drug trade flourished, the presence of government troops increased dramatically, human rights abuses were committed with impunity, efforts for meaningful political participation were blocked, and huge resource extraction projects gouged the state’s natural resources. Inter Pares counterpart KDNG articulately described the connection between large development projects and the resumption of armed conflict in Kachin State in 2011, warning other ethnic groups and the international community about the Kachin ceasefire experience.

Burma is a wealthy nation, rich in natural resources. Natural gas exports alone amount to approximately US$2.5 billion in annual revenues, and as production increases, revenues are expected to increase by 60 percent in 2013. But Burma’s management of the economy, often characterized as “crony capitalism,” involves most of the benefits flowing to a few individuals loyal to the army. Burma’s military absorbs over a quarter of all government spending, despite the absence of external threats. The abundance of corruption and militarization, and the lack of human rights and environmental protection mechanisms, perpetuate conflict and poverty in Burma.

Within this context, our counterparts are exposing the environmental and human rights impacts of large-scale infrastructure projects. In March of 2012, Arakan Oil Watch produced Burma’s Resource Curse. This report warns that the lack of revenue transparency and accountability in Burma is set to be exacerbated by a flood of new investments following the suspension of international economic sanctions. The report calls for the establishment of laws and institutions to manage oil and gas revenues transparently before further extraction of natural resources by foreign investors. Copies of the report have been widely distributed in Burma, with plans for raising awareness among new and future parliamentarians.

Any transition towards democracy, no matter how contested, is going to see a rapid increase in foreign investment, including from Canada, and large-scale development projects extracting Burma’s natural resources. Current practices of corruption and militarization are thoroughly entrenched, creating a high-risk environment for international investment and fuel for further conflict and poverty in Burma.

Inter Pares is proud to be working with community-based organizations that are informing the international community about the context in Burma, while also providing local people with the tools to identify and address the risks that accompany such projects.

KDNG articulately described the connection between large development projects and the resumption of armed conflict in Kachin State in 2011, warning other ethnic groups and the international community about the Kachin ceasefire experience.