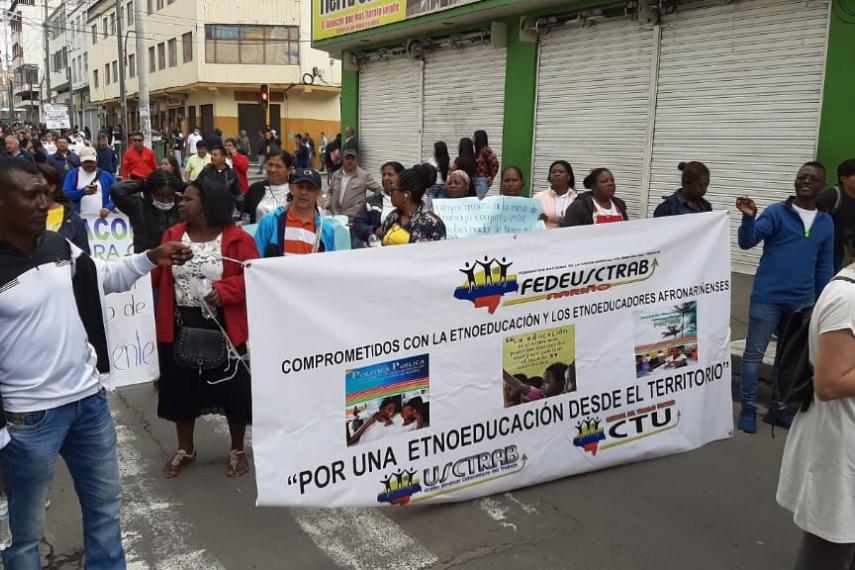 Afro-Colombian teachers from the Pacific Coast take part in a protest in the city of Pasto in support of ethno-education. Credit: UNAFRO

“Stop what you are doing, or you’ll pay the consequences.” Manuel Angulo1,   an Afro-Colombian2 teacher and community leader, knew only too well that this threat should be taken seriously. Manuel has been working for over twenty years promoting the rights of Afro-Colombian communities. A large focus of his work is the struggle for ethno-education: the right of Afro-Colombian children to receive culturally appropriate, quality education that reflects their history and traditions, and that combats racist stereotypes and colonial ideologies prevalent in the existing curriculum.

Over the years, this struggle and many others, including the right to free, prior, and informed consent regarding development projects affecting Afro-Colombian territories, led Manuel to assume key leadership roles. This earned him the respect of his community, but also made him a target of powerful people invested in maintaining the status quo.

Colombia has one of the largest Afro-descendant populations in Latin America, representing approximately one quarter of the entire country. Afro-Colombians, many of whose ancestors were kidnapped and brought to the Americas during the trans-Atlantic slave trade, continue to face widespread discrimination. Together with the country’s Indigenous peoples, they face high levels of poverty, exacerbated by decades of armed conflict that have disproportionately impacted them. For Manuel, ethno-education is not only an obligation of the State, it is fundamental to the dismantling of systemic racism and exclusion that Indigenous and Afro-Colombian communities face.

Since receiving this first threat in 2017, Manuel and his family have been forced to relocate five times, and are now among the estimated 7.5 million Colombians who remain internally displaced. The organization that he leads – UNAFRO – is part of COMOSOC, a broad coalition of social organizations and movements supported by Inter Pares.  Since 2016, over 1,000 social leaders, among them numerous members of COMOSOC, have been murdered as a result of their work of challenging unjust and deeply engrained systems.

The threats faced by Manuel and so many people like him cannot be allowed to continue. Inter Pares will continue to work with our Colombian counterparts and Canadian allies to demand that the Colombian government take decisive action to end structural violence, comply with its obligations under the 2016 peace agreement, and stop the systematic attacks against the country’s social leaders.

1Manuel’s real name has been changed to protect his identity.
2Afro-Colombian human rights and social justice movements normally use the terminology “Black, Afro-descendant, Palenquera and Raizal” peoples, which reflects distinct cultural and demographic centres in the country. For brevity, we are using the term “Afro-Colombian” in this article.

For Manuel, ethno-education is not only an obligation of the State, it is fundamental to the dismantling of systemic racism and exclusion.