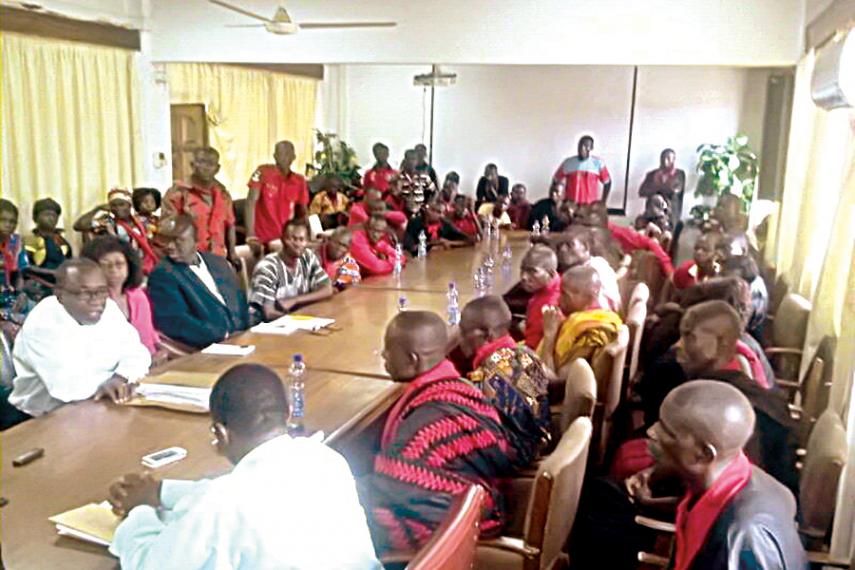 Sefwi farmers: organizing for fair compensation for farms destroyed to build a Canadian mine.

Escaping the baking West African sun, we sat in the shade of a large acacia tree. Nicholas Ennin and five other cocoa farmers began to speak: “In 2004, they came and destroyed our farms to make way for the mine…” What followed was a painful story of deceit and displacement, and the devastation of a Ghanaian community for the construction of Canadian-owned Chirano Mine.

After receiving its lease from the government, Red Back Mines (now owned by Toronto-based Kinross Gold) offered the cocoa farmers compensation of 2.50 cedis (about $1.20 CDN) per mature cocoa tree, proclaiming this a generous increase over the government-approved rate of 2.30 cedis per cocoa tree.

When the community discovered that the government-approved crop rate was actually twice the company’s “generous” offer, they confronted the company representative: “He said they would only pay us more if we could prove the government rate was higher.” While many families had already accepted the lower rate, twenty-five families insisted on the government-approved compensation for their lost cocoa trees, which had been their primary source of income.Inter Pares and Third World Network-Africa have supported the farmers in their peaceful struggle for a just settlement.

The farmers were forced to take the company to court. After two broken promises for an out-of-court settlement, the Ghanaian Minister for Natural Resources ordered the company to pay. The company refused.

Then, in 2012, in a surprise move that benefited only the mining company, Ghana’s Land Valuation Board suddenly claimed that the number of cocoa trees counted by the company and agreed by the farmers was not accurate. Nine years after the trees were destroyed for the mine, the  Land Valuation Board  said that there had to have been fewer trees than the enumerations previously stated and signed by the company and the farmers.

While the company appears to agree with the sudden new calculation , the farmers are feeling outraged, betrayed and discouraged. They have been waiting since November 2012 for the Minister to respond to their calls to break the impasse and reverse the  Land Valuation Board ’s sudden overturn of the agreed tree courts.

Farmers are left with no land and no money to buy land. Desperate, they’ve threatened to re-occupy their land, risking violent repression. They are concerned that their young people, with no work or prospects, are beginning to steal to eat. Meanwhile, Kinross earned over $200 million in profit from Chirano in 2011 alone.

Kinross maintained in its 2011 Corporate Responsibility Report that the lower rate was legitimate. Now, as long as the Minister does not respond, the company has no legal obligation to pay. As of April 2014, Kinross still had not paid fair compensation.

Listening to Nicholas and his neighbours  – dignified even as they describe the strain of their long struggle – it is clear that only a just resolution based on fair compensation can avoid even more devastating harm to this distraught community.

‘In 2004, they came and destroyed our farms to make way for the mine…’ As of April 2014, Kinross still had not paid [the farmers] fair compensation.