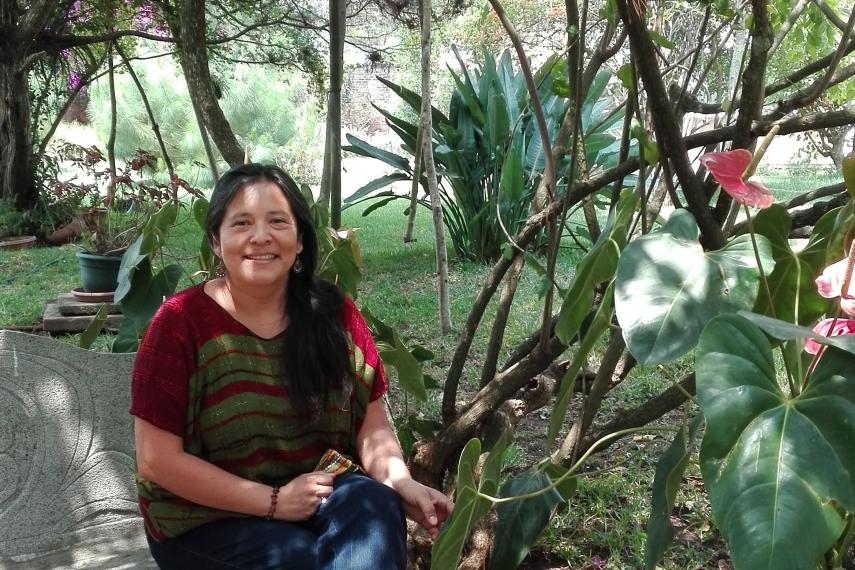 The oldest of nine children, Flor de María Salvador grew up near Guatemala City, helping her mother sell tortillas in order to support her siblings. She learned about the importance of solidarity and commitment very early on.
In 2001, Flor started working for Project Counselling Service (PCS), Inter Pares’ main counterpart in Latin America, in their office for Central America and Mexico – a region known as Mesoamerica. Starting as a secretary-receptionist, she has become a program officer and a key person for PCS and its grassroots partners.
When Flor joined PCS, the peace accords in Guatemala were still quite new, and her colleagues were supporting organizations led by women who had been displaced by war. Flor learned that the return process was only one of the many steps to reach true peace. She saw the struggles of women survivors of sexual violence, and how the sustained, long-term accompaniment they received from women’s organizations enabled some of them to demand justice. The more Flor worked with grassroots organizations from Chiapas to Nicaragua, the more she realized how violence is a strategy used against communities that have been organizing to claim their fundamental rights and to prevent the plundering of their natural resources.
Flor also realized how the entrenched racism and machismo she witnessed echoed her own personal story, being of Mayan Kaqchiquel and Pocomam descent. These days, she views her role at PCS as working to change the structures of oppression that she has seen in action. Whether it is with Indigenous women, who face sexism compounded by ethnic and linguistic discrimination on a daily basis, or undocumented migrant women, who are particularly vulnerable to sexual violence, women’s needs are often unacknowledged and unaddressed. This is why PCS creates spaces for their voices to be heard.
Flor is in touch daily with women working all across Mesoamerica for equality and change. She supports the groups’ organizing and planning, as well as their members’ development. Her accompaniment strengthens these networks, during both their struggles and triumphs. We at Inter Pares have also learned from Flor, and we look forward to future years of collaboration. ¡Gracias, Flor!