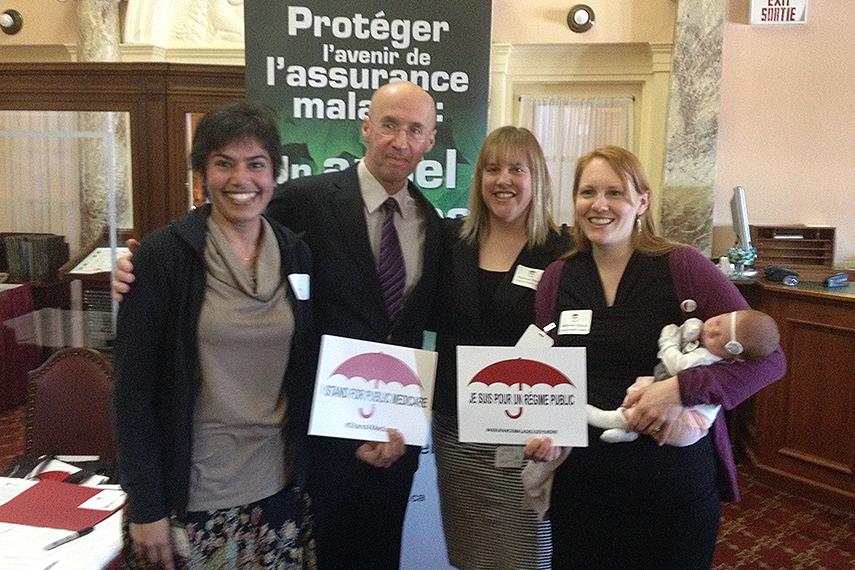 Kevin Page is someone Canada listens to.

On March 31, 2015, the University of Ottawa professor and former Parliamentary Budget Officer spoke to a packed room of parliamentarians, senators, and activists, at the invitation of the Canadian Health Coalition (CHC). The CHC, an Inter Pares counterpart, was commemorating the anniversary of the end of the Health Accord, which governed federal funding for healthcare in consultation with the provinces.

Page’s message was simple but powerful: Funding universal healthcare in Canada is economically viable, but it requires political will and federal leadership. His unequivocal statement directly countered the myth that our country cannot afford to look after its people’s health.

It is equally true elsewhere. Our Philippines-based counterpart, Likhaan, has worked tirelessly for many years to establish low-cost, high-quality primary care facilities for women in the poorest areas of Manila. The clinics are effective models of care, reducing horrific levels of maternal mortality. However, without a comprehensive national framework for universal healthcare, these efforts have felt like a superficial response to a system that doesn’t address the roots of socio-economic inequality.

However, it has been inspiring to witness what happens when the progressive ambitions of a national government and activists come together, even when resources are scarce. A new Reproductive Health Law, along with major increases in the national healthcare budget, will change millions of lives in the Philippines. The law guarantees a national plan for women’s reproductive healthcare, including free family planning and emergency obstetric care. Its passage took many years of advocacy by Likhaan and allies, also withstanding an eventual Supreme Court challenge. At the same time, the government has tripled the Philippines’ healthcare budget by increasing “sin” taxes on alcohol and tobacco. Much of the increased allocation is directed towards PhilHealth, the national health insurance plan which provides coverage for poor people.

Surely Canada, with our greater per capita resources, can rise to our own healthcare funding challenges.

Kevin Page is right. We can afford healthcare, but it will take political will and federal leadership. Inter Pares is committed to the goal of universal healthcare as foundational to just societies, and to supporting the CHC and Likhaan in their efforts.

It has been inspiring to witness what happens when the progressive ambitions of a national government and activists come together, even when resources are scarce.