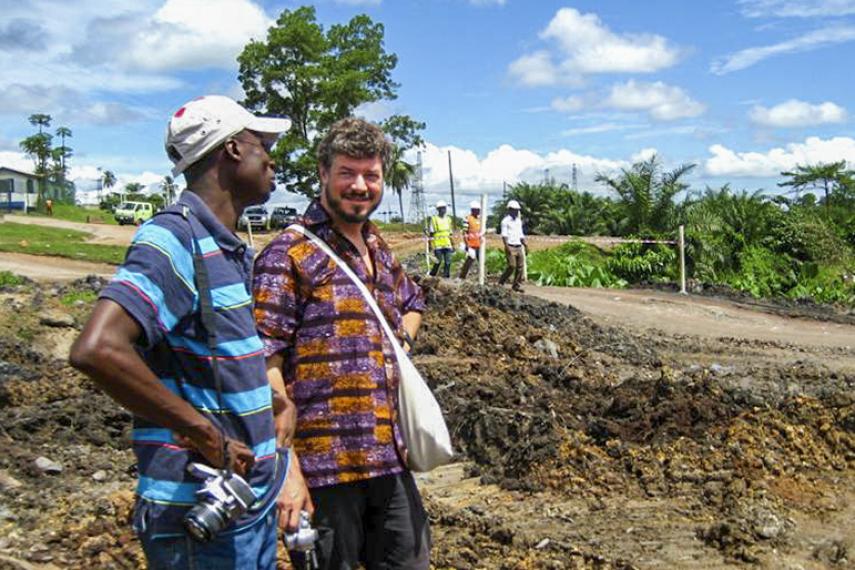 Solidarity in action: Kwesi Obeng of TWN-Africa and Jamie Kneen of MiningWatch Canada at an open-pit gold mine in Ghana. Credit: Jean Symes

"A global economy that pushes millions of people into poverty and bankrupts countries is not only irrational but fundamentally unjust. What kind of society do we want, and how do we get there?”

This is the question that Inter Pares asked last November during a cross-country tour that visited Saskatoon, Toronto, Montreal, and Ottawa. The tour featured Yao Graham, coordinator of Third World Network Africa (TWN-Africa), and Inter Pares staff member Jean Symes. Together they met with Canadians to unpack economic inequality and the mechanisms that perpetuate it, and to explore what we can do about it.

The main and urgent concern is rising inequality in Canada and globally. In Canada, 2011 saw the highest use of food banks since 1997, with nearly 900,000 people depending on them to put food on the table. A new report by the Organization for Economic Co-operation and Development (OECD) finds that inequality in Canada is at a record high, citing as reasons growing income disparity and reduced redistribution. “Taxes and benefits reduce inequality less in Canada than in most OECD countries,” the study states.

Rising inequality is not just present in Canada, but all over the world. Yet while poverty is on the rise, the profits of large corporations are skyrocketing. For Yao Graham, what is at stake is what he calls the “paradox of growth.” Across sub-Saharan Africa, despite a steady growth in gross domestic product (GDP) of 5% per year, chronic poverty has also increased.

Most of this growth in GDP is due to mining activity. The sub-Saharan region holds the world’s largest concentrations of precious minerals such as platinum, diamonds, gold, and bauxite. But while the profitability of the mining sector has steadily increased, according to the latest UN Development Report, this same region is home to the world’s ten poorest countries.

Why hasn’t mineral extraction increased the well-being of ordinary Africans in resource-rich countries? Part of the answer lies in the staggering amount of capital flight – an estimated US $240 billion in profits were illicitly transferred from the poorest 40 sub-Saharan countries between 1970 and 2004, depriving those countries of the fair taxation they need to provide services and build infrastructure necessary to overcome poverty.

TWN-Africa is working to reverse this trend. As the secretariat of the National Committee on Mining, in Ghana, TWN-Africa is helping to build linkages among communities affected by mining, environmentalists, unions, and other social movements, demanding that the resources of their country contribute to the public good. This means reforming mining codes and renegotiating mining contracts so as to ensure companies pay higher royalties to the host country.
It also means pushing for stronger rules against aggressive tax avoidance and tax evasion. This same organizing is happening at the pan-African level with the African Initiative for Mining, Environment, and Society. The work is challenging, but promising. This past year, Guinea-Conakry reformed its mining code, enabling the state to capture greater revenues from taxation.

During the “(In)Equality Matters” tour, TWN-Africa’s message resonated with Canadians.

Here as in Africa, the private wealth of corporations is generated through access to the environmental commons and the natural resources they contain, through public subsidies, through infrastructure like roads, bridges, seaports, and airports.

Corporations have access to a publicly educated workforce, and our publicly funded social services. It’s reasonable that they make a fair contribution back to the public good and to protect the environment from which they draw their wealth.

In the coming year, Inter Pares will be deepening our work with TWN-Africa to promote greater tax justice in Africa. We will also explore how to support emerging work on tax justice here in Canada, most notably through organizations such as Canadians for Tax Fairness, so that together, North and South, we can work towards greater economic justice for the well-being of all.

To find out more about tax justice in Canada: www.taxfairness.ca

Corporations have access to a publicly educated workforce, and our publicly funded social services. It’s reasonable that they make a fair contribution back to the public good and to protect the environment from which they draw their wealth.