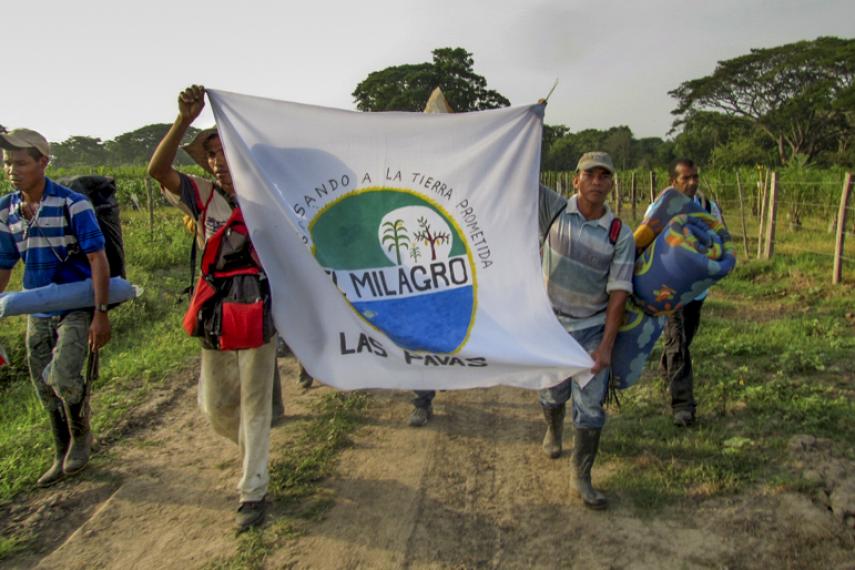 Few of the hundred and twenty-three families living in the community of Las Pavas, in Colombia’s department of Bolivar, have known anything but war and displacement. Political violence forced them to flee their communities and resettle here in the late 1990s. Daring to plant roots again, this time on a parcel of land long abandoned by its owner (a relative of notorious drug lord Pablo Escobar), the families began to make the land productive, planting cassava, plantains, rice, and corn.

As the years went by, the “Paveros” developed strong ties to their new home, and their crops ensured food security for their families. But the relative stability was short-lived. Twice – in 2003 and 2006 – the families had to flee after army-backed paramilitaries threatened them with death. After each occasion, they returned.

Working with Colombian and international organizations, Inter Pares’ counterpart Project Counselling Service (PCS) provided humanitarian and organizational support to the families. This enabled them to create a cooperative and to initiate a legal process to obtain title to the land. As this was proceeding, the absentee owner sold the land to a consortium of palm oil companies, who brought in the national police to forcibly evict the families. Determined not to give up, the Paveros returned once again in 2011. Colombia’s Constitutional Court has since ruled that the eviction was illegal, as the farmers’ land claim had not yet been addressed. Despite this victory, the struggle for legal recognition is not over, and PCS continues to work with the families in building public pressure for a lasting solution.

Many of Colombia’s 4.8 million internally displaced persons face similar struggles, with an estimated 6 million hectares taken from them in land grabs by armed groups and their allies.

The land issue is central to the latest efforts by Colombians to bring an end to fifty years of conflict. According to PCS staff member Eduardo León, “The struggle for land has been a major factor in Colombia’s armed conflict. If this is not resolved – not just by redistributing the land, but also by adopting public policies that benefit smallscale farmers – there will be no peace.”

Watch this excellent video on the situation in Las Pavas, produced by CONTRAVIA (in Spanish):