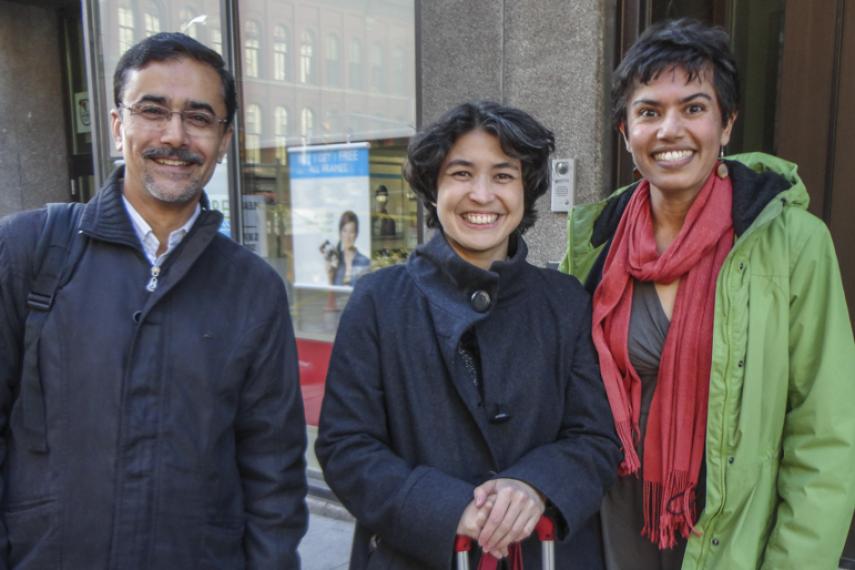 Sanya Reid Smith delivers this message during one of her many presentations to civil society organizations around the world on the Trans-Pacific Partnership (TPP). She works from a small, sparse office in Geneva just down the road from the World Trade Organization. Speaking clearly and succinctly, entirely without notes, she peppers her talk with relevant examples and statistics. The picture she paints is appalling – a landscape where the privileged skew the rules further in their favour, compromising the well-being of millions.

Sanya is the legal advisor and senior researcher at Third World Network-Asia (TWN), an organization Inter Pares has supported for over a decade. In collaboration with the Asia-Pacific Working Group, Inter Pares helped organize a presentation in 2013 to diverse Canadian groups and government officials.

The TPP is a trade agreement spearheaded by the United States. It includes Canada, Australia, and a number of other Pacific Rim countries in both Asia and Latin America. The TPP is being negotiated in secret, and so Sanya’s analysis was pieced together through extrapolation from other US-led trade agreements and confirmed by a series of leaks.

Under an “investor-state” dispute mechanism in the TPP, corporations can sue governments if they pass laws, policies, or regulations that infringe on companies’ current or future profits. Already, countries, including Canada, that signed on to trade agreements with identical mechanisms have paid millions to corporations as “compensation” in these disputes.

The TPP would allow US agricultural subsidies, while requiring the removal of import tariffs (taxes) of other countries. This would give US agribusinesses a substantial competitive advantage. Malaysia currently has a 40% tariff on imported rice in order to increase its food self-sufficiency. Without this tariff, subsidized US rice would be cheaper than local Malaysian rice, devastating the ability of local rice farmers to compete.

The TPP would also require countries to sign another treaty, called UPOV ’91, which would restrict, and in some cases prevent, farmers from saving certain seed varieties, giving large multinationals a monopoly on seed rights. Terry Boehm of Canada’s National Farmers Union, a counterpart of Inter Pares, believes that “if farmers do not want to become serfs, they need to fight [this treaty] with all their energy.”

Inter Pares shares Sanya’s grave concerns of the effect of trade agreements such as the TPP on agriculture, in both the North and the South. Trade is beneficial to the majority when it is deliberately and carefully designed to be. By supporting TWN in developing and advancing their critique with decision-makers and civil society, our shared goal is that free trade becomes fairer trade.

Hear Sanya Reid Smith speaks at the anti-TPP rally in Addison, Texas on Saturday, May 12, 2012:

Challenging trade agreements that give corporations control over democratic decision-making through documentation, exposure, and public education.