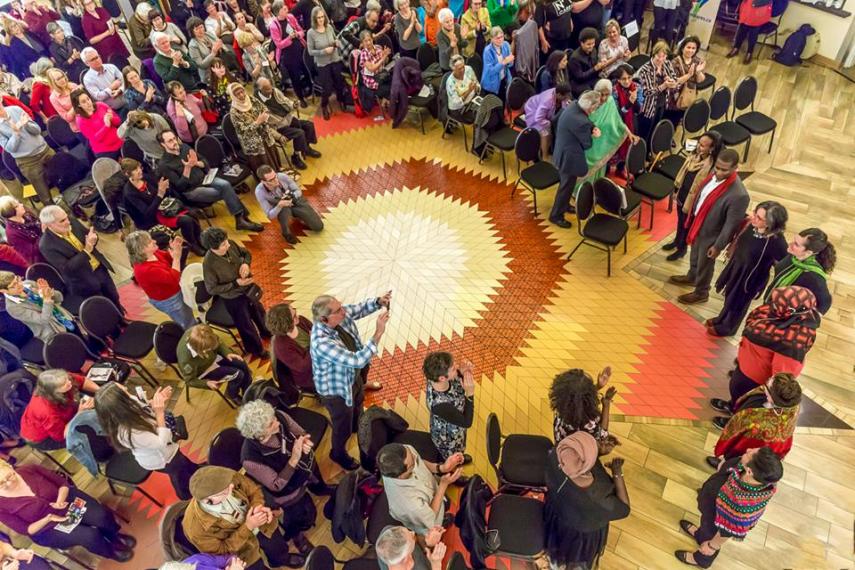 The 250-strong audience claps and cheers at the closing of Seven. Credit: Susanne Ure

This review was written by Bob LeDrew and published in Ottawa Tonite, April 25th, 2017.

Awards ceremonies and recognition events are often long and tedious affairs, heavy on perfunctory gestures and polite applause. But the international development group Inter Pares found a creative and artistic way to celebrate the first Peter Gillespie Social justice Award on April 24: they staged a reading of Seven.

Inter Pares is an unabashedly feminist social justice organization headquartered here in Ottawa. And to mark the first Gillespie Award (presented to the Canadian Council of Muslim Women and received with elegance by that organization’s Executive Director, Alia Hogben), Inter Pares asked local theatre director Jessica Ruano to work on a performance of Seven, a play discovered by an Inter Pares staffer working in Bangladesh.

It should be no surprise that Ruano was asked to direct Seven, given her recent work in creating the verbatim-theatre work The Ghomeshi Effect. While this is more a table-read than full production, she uses some of the same techniques seen in her own work to animate Seven. At times, readers move out from behind their music stands and scripts to circle the person reading; dialogue overlaps, voices double, phrases repeat as if the readers are performing a round; as part of Mukhtar Mai’s story unfolds, she hands small bits of fabric to the other readers, who pass them hand to hand and into the audience, as if we are all sharing a communion of cloth. Hand gestures and simple motions like turning away from the audience feel inspired by the choreography created by Amelia Griffin for Ghomeshi, while adapted for non-professionals with (I’m guessing) limited rehearsal time.

With little physical action taking place, and no lighting or musical effects save for some interstitial music provided by an Inter Pares staffer playing a keyboard, the audience was left to focus on words and faces — splitting attention between the words as spoken by the activists, as chosen and edited by the writers, and delivered by the seven readers. Above the readers were hung portraits of the seven activists.

The stories were compellingly read, and a number of them contained striking turns of phrase that stick in the memory: Northern Ireland’s Inez McCormack says “It’s a very cold house for the poor,” Annabella de León declaims “Impunity is THE QUEEN of Guatemala”; Mukhtar Mai’s exhortation that women should be taught “to read. To write. To know their rights.”

Mai’s story, delivered by Babeker, is possibly the most thoroughly told in Seven, and it is a difficult one to hear. Mai’s brother was a rape victim who was subsequently accused of rape; when she is to apologize on behalf of her family to a higher-class family, she finds herself the victim of a gang-rape while her father and brothers are forced to listen and watch.

What is most remarkable about these stories — and the women who lived them — is the persistent courage they demonstrate. Mukhtar Mai goes on, after her ordeal, to found schools (which she herself attends to become literate!); Russia’s Marina Pisklakova-Parker goes from a domestic violenceic-violence helpline to initiating a network of more than 100 in Russia; Anabella de León took herself and her family out of poverty became a lawyer, and then a member of Guatemala’s Congress.

The compelling readings — six were in English, while Farida Azizi’s words were read in French by uOttawa professor and writer May Telmissany — were for the most part flawless. Telmissany’s miking was a times a bit subject to some clanking noises (and the whispers of simultaneous translation were a passing distraction). While Harewood quite obviously stood out on stage as the only male tasked with bringing an activist’s words to life, he acquitted himself admirably — of course, years of broadcasting experience helps a person with delivering words with impact. Rebecca Wolsak began her reading of Northern Ireland’s Inez McCormack with a game try at the accent, which quickly faded and wasn’t missed.

While this version of Seven obviously was different than what might be produced on a local stage, the congruence between this artistic work with the real-life work done by both Inter Pares and by the women whose words make up the work made for a compelling evening several cuts above your typical award ceremony.