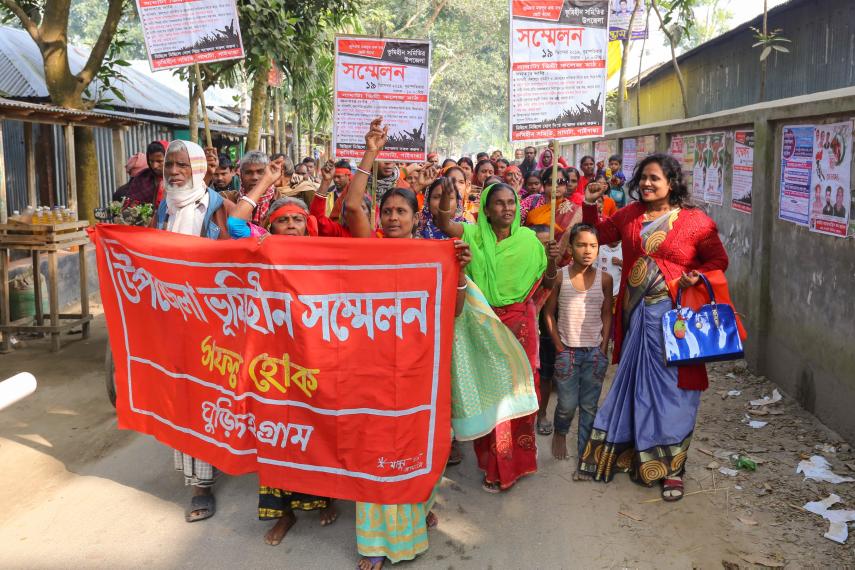 Our counterpart organization, Nijera Kori, brings poor, marginalized women together in local groups where they learn about their rights and gain the confidence to demand those rights be respected. Credit: Nijera Kori

Hundreds of people surround a community clinic, angry about its women's health practices. The group's motives? Not what you might think.

These protesters in rural Bangladesh weren’t arguing against contraceptives or blocking women’s access to reproductive services. Instead, they were making one simple demand: that the clinic treat the women who go there with respect.

In Bangladesh’s patriarchal society, our counterpart organization, Nijera Kori, brings poor, marginalized women together in local groups where they learn their rights and – just as importantly – gain the confidence to demand they be respected. These women’s groups and allied men’s groups are using that knowledge and the power of their numbers to create change.

Over the past year, they have created change at their local health clinics.

Staff at village health clinics are mostly men and often come from cities and bring with them derogatory attitudes toward rural villagers, especially women. When a woman goes to a clinic with sexual or reproductive health problems it can become a mortifying experience. Clinics are small with little privacy. Women are often uncomfortable raising important, even dire, health issues when the entire staff and other patients can overhear them. Many prefer not to go, risking their health rather than suffer the public humiliation that such a situation entails.

But these grassroots advocates, supported through Nijera Kori and Inter Pares, are demanding that clinics change. The groups – of women and men, adults and youth – reached out to clinics and asked them to establish private spaces for consultations with women and girls.

Some clinics immediately understood and responded by setting up private areas. Other clinics dismissed the request. So, the groups surrounded the clinics and voiced their demands until they could no longer be ignored.

These women’s health activists successfully achieved separate spaces for women and girls in 19 community clinics last year. It may seem like a small victory but it’s one that could make a life-or-death difference. And it’s another step forward for poor, rural women in asserting their rights as human beings to be treated with respect.

In Bangladesh’s patriarchal society, our counterpart organization, Nijera Kori, brings poor, marginalized women together in local groups where they learn their rights...