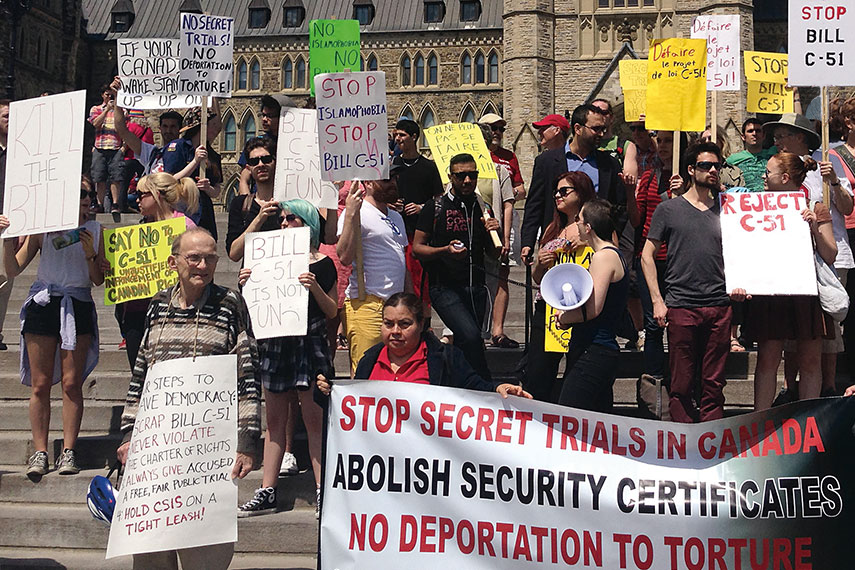 For several years now, many governments in the Americas have been describing dissent or criticism of state policies as illegitimate, or worse, criminal. In Guatemala, for instance, the government has criminalized people who oppose extractive industry projects, and has even labelled them terrorists. In other cases, such as Chile, the government’s criminalization tactics include the recycling of old anti-terrorism laws.

In Canada, a similar discourse has also appeared in recent years through the reports of the Royal Canadian Mounted Police (RCMP), the Canadian Security Intelligence Service (CSIS), and the Ministry of Public Safety. Tabled in February 2015, Bill C-51 could be seen as enshrining this view of dissent into law, as it labels interference with the country’s economic stability as a threat to national security.

Both the bill and government discourse greatly trouble the International Civil Liberties Monitoring Group (ICLMG), an Inter Pares counterpart that promotes and defends civil liberties and human rights. According to its coordinator, Roch Tassé: “The government talks about activists in the environmental movement, for example, as extremists, and theorizes they could resort to terrorism. So government documents quite categorically associate dissent with terrorism.”

Dissent is permitted under Bill C-51, but how narrow is this category? “We can speculate that some protest activity might be covered by this law and could be deemed a threat to the country’s national security. Before a demonstration, if the police suspect violence, they could invoke preventative detention clauses, and detain demonstrators for up to seven days before the event even begins. Would the government go so far as to put people who go to demonstrations on no-fly lists? If CSIS is given the power to disrupt terrorist plots, would they be able to legally infiltrate all social movements that oppose the country’s economic policies?”

Such concerns led the ICLMG to take action. Working with other organizations and legal experts, it developed joint analyses and strategies. Through meetings with Members of Parliament and policymakers, and through presenting to a parliamentary committee tasked with studying the bill, they all shared their concerns with decisionmakers. ICLMG has been raising awareness through its e-newsletter, circulating a petition, and liaising with grassroots activists who oppose the bill. Anticipating Bill C-51’s adoption, ICLMG has also been discussing legal challenges with experts who deem portions of the text to be clearly unconstitutional.

Despite the gravity of ICLMG’s concerns, Roch takes heart in the strength of opposition that has emerged to the bill from all corners of Canadian society. “This is the first time in ten years I’ve seen so many objections from all sectors in Canada – all opposition parties, law professors, four former prime ministers, former Supreme Court judges, university researchers. The media, op-eds, editorials in major Canadian newspapers have all objected to the bill. There is a consensus.”

Regardless of the bill’s adoption, such unanimity signals that defending the right to dissent is still vitally important to Canadians. Inter Pares is honoured to support ICLMG in its role at the heart of this defense.

This is the first time in ten years I’ve seen so many objections from all sectors in Canada – all opposition parties, law professors, four former prime ministers, former Supreme Court judges, university researchers [...]There is a consensus.