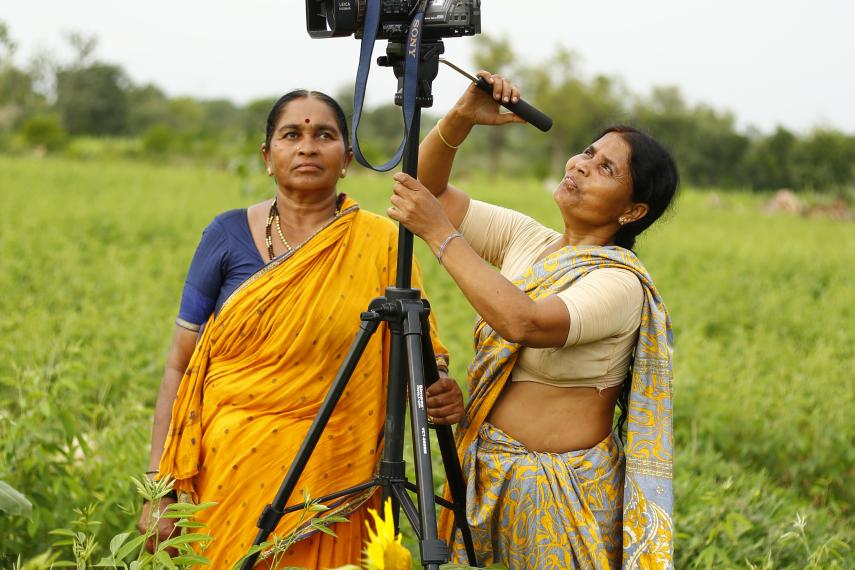 For over 20 years, Inter Pares’ counterpart DDS has trained Dalit women in India to be at the helm of a camera, documenting their own realities and perspectives. Credit: Deccan Development Society

For more than 35 years, long-term Inter Pares counterpart Deccan Development Society (DDS) has worked with poor, Dalit caste women farmers in southern India. Dalit women have lived on the margins of society, their voices unheard, their lives as small farmers disparaged. They have little to no formal education, and few have had the opportunity to learn to read or write. There are 900 TV channels in India, which is home to the biggest film industry in the world, but the lives of these women are rarely portrayed except in images of poverty and pathos.

Film is an accessible communication technology, and DDS has long used it to raise awareness about social issues to effect positive change. So twenty years ago, DDS collaborated with Dalit women to create an alternative media outlet, the Community Media Trust (CMT), accessed and controlled by the women themselves. Through CMT, Dalit women have learned how to use cameras and edit films about their lives and communities. And just as crucially, they’ve learned to be proud of their knowledge, their skills as farmers, and the food they produce. In creating Community Media Trust, DDS has facilitated processes for Dalit women to better understand the injustice they face in their daily lives. And the women have empowered themselves through the act of documenting their own realities, and creating art through their own camera lens. In stark contrast to the portrayal of Dalit women in mainstream Indian media, in CMT films they are smiling, happy and proud – a celebration of their lives.

Building on this experience of the women as film-makers, in 2019 DDS launched the Jai Chandiram Memorial National Community Media Film Festival, named for a journalist who promoted women in media and the use of film for education. Presenting 34 films created by marginalized people from India and other Asian countries, the festival became a platform for the voices of marginalized people themselves. It made their struggles visible to a wide audience, and simultaneously celebrated these beautiful expressions of their lives. From sustainable food systems of Indigenous people, to the efforts of women to be recognized as farmers, to documentaries about the ceremonial log drums of Nagaland, the films present the people’s lives holistically – mobilizing, educating and raising awareness of a rich reality that is rarely seen by others. Their films say to the audience “this is who we are, see us, learn about us. Yes, we struggle, but we are also happy and capable and proud and beautiful.”

Film is a tool in these struggles. In the women’s hands it has become art as they interpret their lives through their own eyes, showing the world their strength and joy, their determination and confidence. Their art has helped them reveal who they are – their whole selves – to themselves and others, and such power can help change the world.