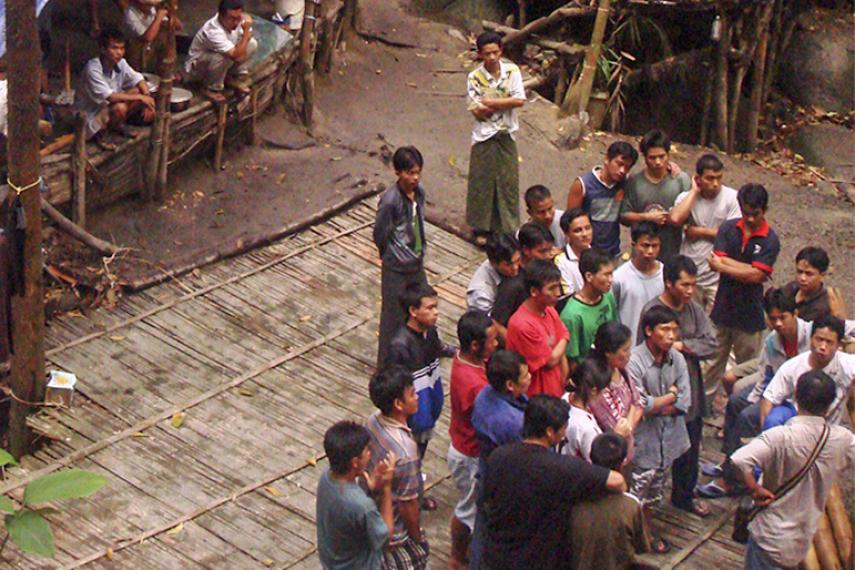 Outside Kuala Lumpur, Malaysia: Makeshift camp in the jungle.

Victor Biak Lian was visibly angry as he told us about several young men from Burma who were sold into slavery. Victor, a founder of the Chin Human Rights Organization, is a colleague of Inter Pares.

The story began when ten young men, like thousands of others, fled persecution in Chin State, a highly militarized region of Burma. They paid a broker to transport them to Malaysia where they hoped to find work. Arriving at the border of Malaysia and Thailand, the young men were turned over to another broker. Two of the men were separated from the group and put onto a fishing boat which they assumed would take them to Malaysia. Instead, they were greeted by an armed captain who told them they now belonged to him. For the next twenty-two days, the fishing boat plied the waters off the coastline of Thailand, Malaysia and Indonesia. There were seven other crew members, all virtual slaves. They were fed little and worked hard.

One day a storm warning came in over the radio and the boat headed for shore. In the dark of night, all of the men slipped over the side. For the next four years they worked on a rubber plantation along the Thailand-Malaysia border and witnessed traffickers prey on other refugees. Some refugees were sold into slavery. Others were taken into Malaysia if they could pay a hefty fee. Women refugees often simply disappeared.

"Theirs is not a unique story," said Victor. "Thousands of Burmese refugees are coming to Malaysia seeking security. But what they find is exploitation, extortion, trafficking, and sometimes death."

Victor’s concerns were corroborated in April when the U.S. Senate Committee on Foreign Relations released a report on Burmese refugees in Malaysia and southern Thailand. Male refugees, the report confirmed, are often sold into slavery on the fishing fleets. Women are frequently sold to brothels. The report condemned the Malaysian government’s use of civilian vigilante groups to hunt down refugees in order to deport them. The report noted that some corrupt Malaysian authorities are complicit in handing over refugees to traffickers.

International attention and condemnation are required to put an end to these abuses. In the meantime, Inter Pares and the Chin Human Rights Organization are supporting refugees in Malaysia to organize to reduce their vulnerability. Refugee communities are now negotiating directly with authorities to report mistreatment and corruption by officials. They are developing basic services and working with UN agencies to provide protection to women and children.

Some day these refugees will go home when human rights and freedom return to Burma. For now, they are developing their own collective security in a hostile and often dangerous environment.

Some refugees were sold into slavery. Others were taken into Malaysia if they could pay a hefty fee. Women refugees often simply disappeared.