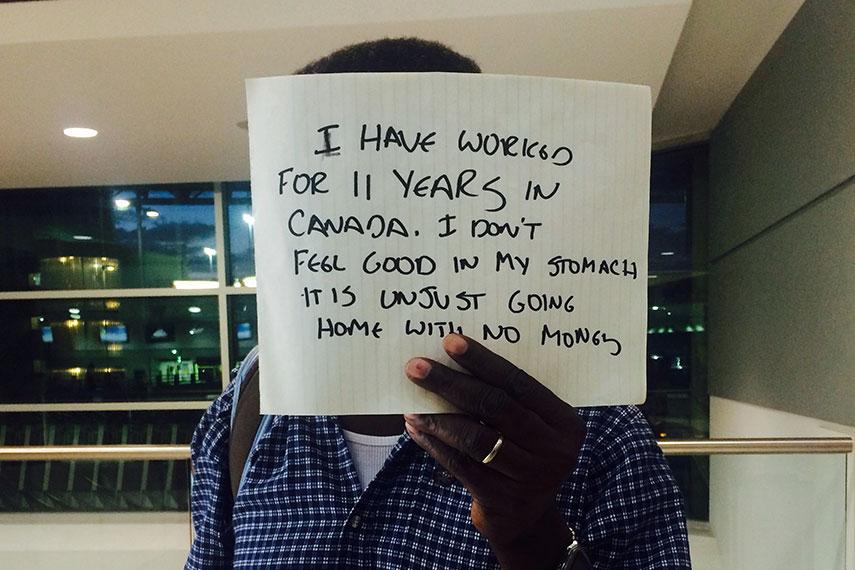 Photo taken by J4MW as part of its airport actions: A migrant worker leaving Canada as a result of the “four in four out” rule. Credit: Justicia for Migrant Justice

“I can’t believe such injustices can happen here in Canada,” said Lucy, an Inter Pares donor. Her statement resonated in the room, and a silence followed. The Inter Pares Film Night participants all turned back to the screen, where Min Sook Lee, filmmaker and activist, was speaking with the group via Skype from Toronto.

We had just finished watching Min Sook’s documentary El Contrato, a twelve-year-old film that continues to give a relevant and insightful analysis of the working conditions of seasonal migrant workers who come to Canada every year. Min Sook was not surprised by Lucy’s reaction. Even though there are more than 300,000 migrant workers in Canada being employed in sectors as diverse as agriculture, food services, and health care, their precarious working conditions and challenges go almost unnoticed.

Fueled by the crowd’s interest, Min Sook explained how the current framework contributes to migrant workers’ vulnerability and positions them as second-class citizens in terms of their rights and benefits. Though they pay taxes, many can’t access employment insurance or public health services if they become ill or injured. With few exceptions, workers can’t apply for permanent residency, and their visas are tied to their employer, who has the power to terminate their contract at any time and have them deported. This skewed power dynamic has led to exploitation and sometimes physical abuse of migrant workers.

Min Sook also drew attention to the “four in and four out” rule, in effect since April, which will force thousands of migrants who have worked in Canada for four years or more, to return to their country, without any possibility of re-applying for another four years. She noted that, while the need for jobs fulfilled by migrant workers is ongoing, rules like this reinforce the fabricated notion of temporary needs. Worse, it depicts migrant workers as a disposable labour force.

Migrant workers must be treated with equity, dignity, and fairness. Along with our allies and counterparts here and abroad, Inter Pares will continue to advocate for safe and just working conditions for migrant workers, and raise awareness among Canadians around these issues.

Even though there are more than 300,000 migrant workers in Canada, their precarious working conditions and challenges go almost unnoticed.