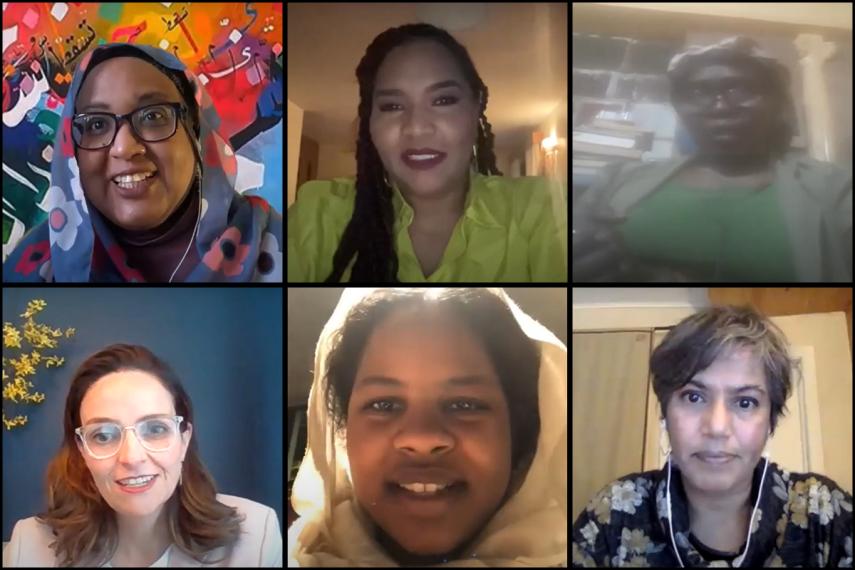 In 2018-2019, a non-violent revolution, with women at the forefront, liberated Sudan from 30 years of dictatorship by Omar el-Bashir. A democratic transformation seemed within reach at long last.

A transitional period followed—overseen by a Sovereign Council of military and civilian representatives—and free and fair elections were promised for 2022. Sudan’s women's movements began working to dismantle decades of legally and socially-enshrined patriarchy, but were largely excluded from the transitional government.

On October 25, 2021, General Abdelfattah El Burhan seized control of the government, on the cusp of his promised handover of executive powers to civilians. The military detained civilian leaders, including Prime Minister Abdalla Hamdok, and imposed a communications blackout.

Despite this brutality, Sudan's streets continue to see weekly Marches of the Millions. Nagda Mansour, an activist from Darfur, spoke to webinar attendees about what unites the demonstrators.

“[We fight for] the creation of a modern Sudanese state based on equal citizenship, human rights and rule of law. We chant hurriyya, salām wa ‘adāla: freedom, peace and justice." Protesters overwhelmingly are calling for "no partnership, no compromise and no negotiation with the military."

Dr. Sara Abdelgalil, of Sudan Doctors for Human Rights, warned that if the coup isn't reversed, women could face the return of the worst elements of the El-Bashir regime, like the so-called public order law that controlled women's conduct and dress in public. Today, young women are not only by participating in protests, she said, but also making decision-making space for themselves inside the Resistance Committees.

Watch the full webinar, which includes discussion of how the international community can better support Sudanese civilians.

Grassroots Resistance Committees are working for a civilian-led way forward for Sudan, by democratically producing proposals for a way out of the multifaceted crisis. In contrast, international actors, like the UN, are pushing for power-sharing agreements between military and civilian groups – essentially the previous status quo.

"The situation now in Sudan is a zero-sum equation, where [it is] either the street and the people, or the military," said Nisreen Alsaim, youth leader and chair of the UN Secretary General’s Youth Advisory Group on Climate Change. "Trying to have a way out for the military, trying to have a middle solution, [shows that] the international community and the UN agencies does not have enough faith in the Sudanese people. And this is why Sudanese people don't actually trust them."

Kholood Khair, a political analyst and writer, denounced international actors’ use of "both sides" language and their tacit or overt approval of process that legitimize the military’s position.

“These same international actors will, in the next breath, espouse democratic values and say that they support civilians in the transition," she said. For Kholood, what the international community sees as a crisis, many Sudanese see as a return to revolution.

How can the international community show solidarity with Sudanese civilians?

For Sara, the international community can show solidarity in many ways: supporting first-aid training and basic needs for people participating in civil disobedience, pushing for discussions in their countries’ parliaments, and demanding decision makers isolate the junta, including via individual sanctions against military leaders.

Sudan's future is uncertain. But regardless of what happens in the political sphere, Kholood said, the Sudanese "street" shows the tenacity and resolve that stand Sudan in the best possible position to see through the democratic and civilian demands.

"There's no doubt in my mind that this revolution will succeed and that Sudanese women and youth will continue to lead the way.”

For 20 years, Inter Pares has collaborated with Sudanese feminist organizations that advocate for women's agency in the political and social spheres, and in accessing sexual and reproductive health and rights. We remain committed to supporting these movements.

There's no doubt in my mind that this revolution will succeed and that Sudanese women and youth will continue to lead the way.