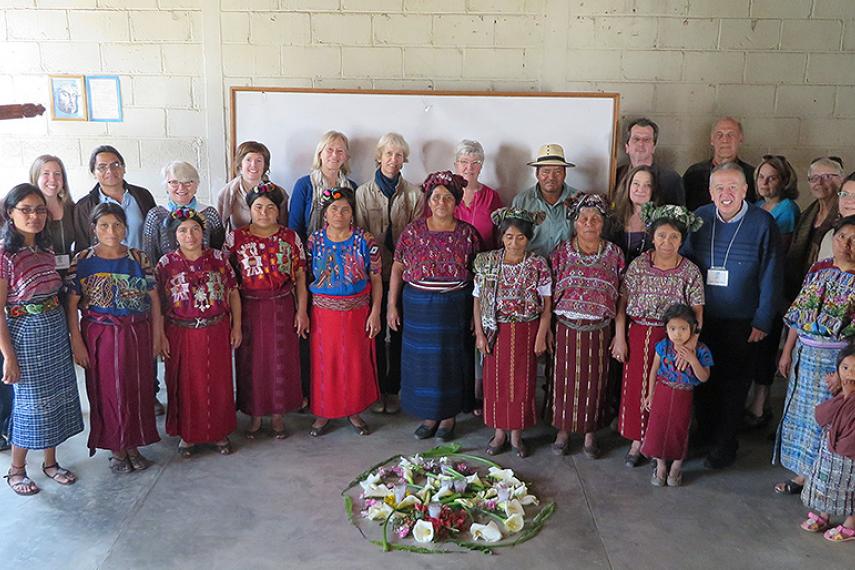 It was the first time that Inter Pares had organized an exchange between supporters and counterparts outside of Canada. Doing so in Guatemala, a country with a history and context that are so rich and so challenging, and with our long-time counterpart Project Counselling Service (PCS), gave the trip a particularly special design.

Bringing together people who otherwise would never have the chance to meet was a powerful experience. Imagine a 6’3’’ retired law professor from Toronto meeting a diminutive Indigenous woman whose first exposure to the legal world was her own participation as plaintiff in a historic case of sexual slavery during the country’s internal armed conflict. One could feel the human connection and solidarity growing as our group demonstrated with their presence that Canadians do know, do care, and do act in favour of struggles for justice.

The bus rides between towns and meetings were full of questions, discussion, and podcasts relating to the difficult context in which many organizations we support operate. Meeting by meeting, our conversations built on one another and participants began to connect the issues: impunity and ineffective rule of law; the impact of weak legal institutions when dealing with tense disputes between Indigenous communities and powerful mining corporations; land conflicts fueled by mining and monocrops; how this in turn compromises food sovereignty and security. We learned how nothing exists in isolation.

For Flor Salvador, a PCS staff member who travelled with us, seeing her country through foreign eyes was an extraordinary and transformative experience. She was encouraged by knowing supporters of Inter Pares in person and deepening the common thread that unites us – one that is based on respect, solidarity and camaraderie.

Once home, many participants took action in their own communities: organizing meetings with migrant worker solidarity groups, hosting public and private presentations about Guatemala, publishing blog posts and poetry, and fundraising for Inter Pares’ programs. Transformation is not something you can easily measure, but these examples of actions are surely proof of it.

The Solidarity Tour was in many ways an experimental exchange. We have seen a beautiful pattern emerge: exchange – transform – act. The Tour is over, but solidarity between communities continues.

Flor Salvador was encouraged by knowing supporters of Inter Pares in person and deepening the common thread that unites us – one that is based on respect, solidarity and camaraderie.