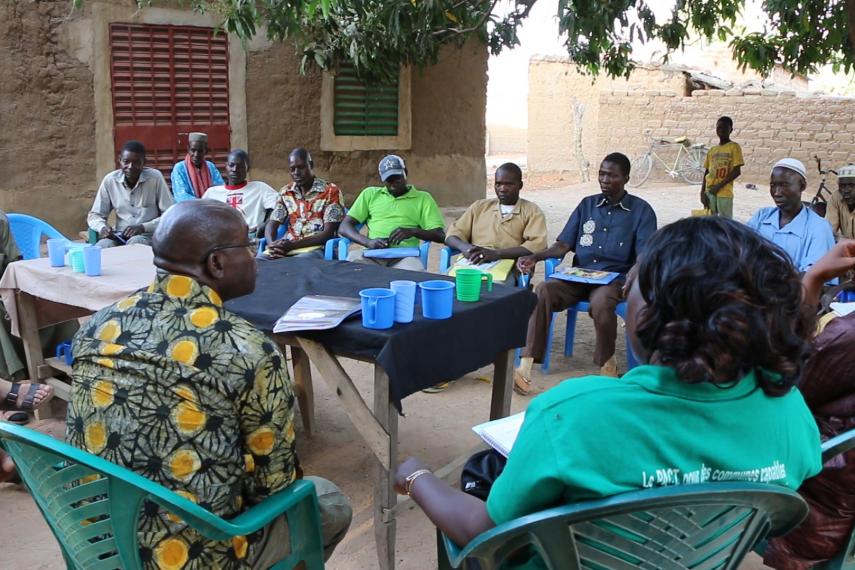 Sitting in a circle, Oumarou and twenty-five other farmers greet us as we finally arrive after a bumpy and dusty ride from Ouagadougou, Burkina Faso. Oumarou was one of three cotton farmers who participated in an international learning exchange that Inter Pares organized in 2014 to India. While there, he met with Indian cotton farmers, and heard first-hand accounts of the many hardships and farmer suicides due to the failure of Monsanto’s genetically modified (GM) Bt cotton. He also heard of the burden of debt that the victims’ families still have to carry today.

Oumarou and the other farmers present today introduce themselves as “farmer-researchers.” Working with COPAGEN, an Inter Pares counterpart, they have received training on how to record and document crop yields, the amount of pesticides and fertilizers used, and the costs incurred in producing their cotton. This is all part of a three-year farmer-led research initiative called “Bt Cotton and Us: The Truth from our Fields.”

For the past two years, over 500 farmers from the different cotton-growing regions in Burkina Faso have documented their experience with Monsanto’s Bt cotton. This research is providing an important counterbalance, as Burkina Faso was the first country in West Africa to adopt genetically modified organisms (GMOs), and industry often lauds its success when promoting GMOs in other countries.

Oumarou explains how Bt cotton was first introduced in his area. “The cotton farmers were not consulted. We were told that Bt cotton would be good for us, and we would save money as we would have to spray less pesticides. This was true for the first year, but not after that. We now have to spray two to three times more, and the caterpillars still come.”

I ask Oumarou what motivated him to be a leader in this research. Oumarou answers, “The farmer suicides in India left many orphans. We do not want this to happen here.”

Many claims have been made by GMO proponents that they provide better yields, require less pesticides, and help to solve hunger. Through our work with farmers in the global South and here in Canada, we have heard a different story. In 2005, Inter Pares convened farmers from around the world to a policy dialogue with the Canadian government to share concerns about genetic engineering and the impact it was having on biodiversity, family farms, and peasant agriculture. Participants heard stories of contamination, intimidation, debt, and desperation. The dialogue helped to bring badly needed contextual analysis into policy-making that was too narrowly focused on technology.

It’s been twenty years since GMOs were first introduced in Canada. In an effort to shed more light on their impact, Inter Pares is working with the Canadian Biotechnology Action Network on its GMO Inquiry. Just as in Burkina Faso, this research process is providing some important information to farmers and to the broader public – information that we hope will help us move towards farming systems that are more ecological and nurturing for the Earth and for family farms.

Many claims have been made by GMO proponents that they provide better yields, require less pesticides, and help to solve hunger. We have heard a different story.