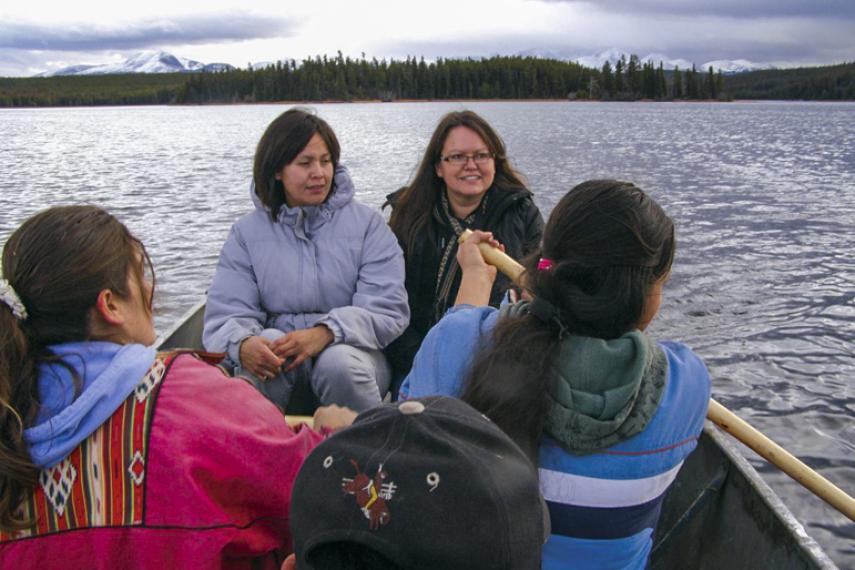 Teztan Biny or Fish Lake in the far north of British Columbia: Members of the Xeni Gwet’in community of the Tsilhqot’in Nation taken by Ramsey Hart out on the lake.

A substantial update has been added to the original article in June 2014. Please read the additional information related to this case at the bottom of the page.

Ramsey called it the Zombie Mine project. “No matter how often you kill it, it keeps on coming back – and always worse than before.” Ramsey Hart is the Canadian Program Coordinator for MiningWatch Canada, and the mine in question was Taseko Mines Ltd.’s proposed Prosperity Mine, which would have been located in the far north of British Columbia near Teztan Biny. In coordination with the Tsilhqot’in First Nation, Ramsey was just finishing up MiningWatch’s comments on the terms of reference for the upcoming Project Review Panel for the Prosperity Mine – for the second time.

What was worse, Ramsey said, was that “the Tsilhqot’in people, after months of grueling work, thinking that they had finally been heard by the Canadian government, now have to go through the whole process again. This is just not right.”

In July 2010, after months of technical reviews and detailed submissions by the Tsilhqot’in Nation, MiningWatch Canada and other organizations, a federal review panel issued what then-Federal Minister of the Environment Jim Prentice called a “scathing” report – “probably the most damning I have ever read.”
With reason.

Fish Lake – Teztan Biny in the Tsilhqot’in language – along with its watershed is a remarkably productive trout fishery. It is an important economic, spiritual, and cultural area for the Tsilhqot’in, and habitat for at-risk grizzlies. The project would have drained Teztan Biny and turned the upper watershed into a toxic tailings pond, causing devastating and irreparable damage to the Tsilhqot’in, the area’s fish stocks and the grizzly.

But barely one year later, not only did the company resubmit a bid for a “New” Prosperity Mine, the federal government agreed to put it through the review process again. While the company claimed it was a new project, Ramsey noted that the first bid included substantially the same idea as an alternative, and both the company and the federal panel agreed that the alternative would result in even greater long-term risk than the primary proposal.

It doesn’t have to be this way. Ramsey points out that there are many examples of positive collaboration between First Nations and mining companies. “The Tsilhqot’in are not against resource development. They are against destructive and irresponsible mining.” Rather than waste time and resources in repetitive abuses of process, they want to develop more acceptable and sustainable economic options.

Ramsey, and MiningWatch, will continue to collaborate with the Tsilhqot’in and other First Peoples in their struggle to protect their livelihoods and steward the land and water to the benefit of all. As it has since it helped found MiningWatch over a decade ago, Inter Pares will continue to support efforts to promote permanent change in the Canadian government’s relationship with Aboriginal peoples, and the way environmental and socio-economic development choices are made in Canada.

The Zombie mine – killed for a second time now – still won’t die. And while it shamefully is once again challenging Aboriginal rights, it also continues to waste time and money that could be better spent on local economic development that actually benefits the people in the region.

In October 2013, the independent federal project review panel rejected Taseko Mines’ “New” Prosperity Mine proposal, for much the same reason it rejected the original: negative impacts on Aboriginal rights and Aboriginal uses of the area, water quality, fish and fish habitat, and endangered grizzly bears. The “new” proposal did not propose any viable means of addressing these negative impacts, the panel concluded.

Four months later, the federal government responded to the review panel’s conclusions, and rejected the mine.

“We call on the province and Taseko to acknowledge that this is the end, to pack up their tents and go home,” Xeni Gwet’in chief Roger William said. “The company has wasted too many resources and time on a project that was first rejected in 1995. It is time to look elsewhere and leave us in peace.”

But instead Taseko Mines has launched two lawsuits seeking both to overturn the decision, and to challenge the environmental review process itself.

Chief William summed it up: “For the Tsilhqot’in, after all these years spent under the oppressive shadow of this proposed project, it is time for us to finally be set free to work with other communities and companies in the area on economic projects that will truly benefit this region, without destroying the land and waters on which we all depend. We have not struggled for 20 years in the courts, all the way to the Supreme Court of Canada, simply to have our Aboriginal rights mean nothing at the end of the day.”

Supporting Canadian First Nations in their fight to preserve their livelihoods by collaborating with organizations that work towards mining accountability.