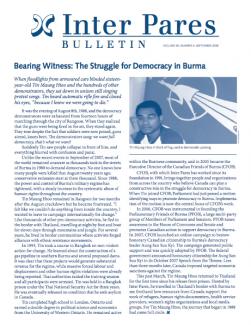 Bearing witness: The struggle for democracy in Burma

When floodlights from armoured cars blinded sixteen-year-old Tin Maung Htoo and the hundreds of other demonstrators, they sat down in unison still singing protest songs. Tin heard automatic rifle fire and closed his eyes, “because I knew we were going to die.”
It was the evening of August 8th, 1988, and the democracy demonstrators were exhausted from fourteen hours of marching through the city of Rangoon. When they realized that the guns were being fired in the air, they stood again. They rose despite the fact that soldiers were now poised, guns aimed, knees bent. The demonstrators sang: we want full democracy, that’s what we want!

Inter Pares work with civil society organizations includes humanitarian services, health programs, women’s rights education and advocacy, human rights documentation and protection, and the development of independent media. Based in neighbouring countries, these organizations work independently of the regime’s control with communities in Burma and with those who have fled across borders. At home, we work with solidarity organizations to inform Canadians and to promote a role for Canada in restoring peace, human rights and democracy in Burma. With donations from thousands of Canadians, Inter Pares has been working with many of these organizations since 1992.
Supporting internally displaced people

In eastern Burma, an estimated 3,200 villages have been destroyed since 1996 due to military operations against ethnic peoples. At least a half million people are currently internally displaced in the eastern regions, including more than 78,000 people who were forcibly dislocated in 2007.

Some facts about Burma

Encountering the spirit of hope

The monks say that in Burma many parents cannot afford to send their children to government schools and that the quality of education is low. Hardly any teachers have training and there are few learning resources or books. The military regime spends less than a dollar per student per year on education. Only some children manage to pass high school and even fewer graduate from university. An entire generation of young people is bereft of an education.