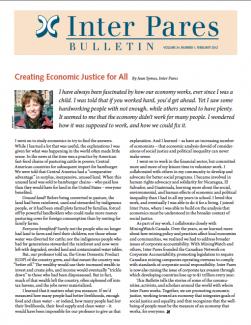 Creating Economic Justice for All

With MiningWatch and others, Inter Pares founded the Canadian Network on Corporate Accountability, promoting legislation to require Canadian mining companies operating overseas to comply with standards of corporate social responsibility. Inter Pares is now also raising the issue of corporate tax evasion through which developing countries lose up to $1 trillion every year.

"A global economy that pushes millions of people into poverty and bankrupts countries is not only irrational but fundamentally unjust. What kind of society do we want, and how do we get there?”

What is at stake is nothing less than the quality of life for millions of the poorest and most marginalized people on the planet. The rules of trade can wipe out entire industries, leaving thousands unemployed; it can raise the cost of basic medicines out of reach; and it can create a generation that is hungrier and more food insecure than the one before it.

Each year on the occasion of our Annual General Meeting, Inter Pares invites our counterparts and collaborators to share their views on social justice. We would like you to join us for the 2012 edition as Asha El-Karib and Amanda Dale discuss the inspiration and the challenges of promoting peace and women's rights amidst violence and fundamentalism.

Decades of corruption and mismanagement have left Burma’s military generals wealthy and the economy a disaster. The country’s system of multiple exchange rates has created a fiscal black hole.