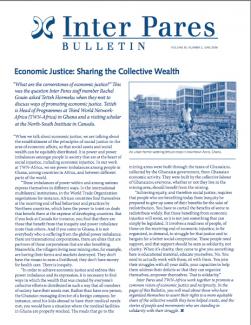 Achieving equity, and therefore social justice, requires that people who are benefiting today from inequity be prepared to give up some of their benefits for the sake of redistribution. You have to curtail the benefits of some to redistribute widely. But those benefiting from economic injustice will resist, so it is not just something that can simply be legislated. It involves a readiness of people, of those on the receiving end of economic injustice, to be organized, to demand, to struggle for that justice and to bargain for a better social compromise. These people need support, and that support should be seen as solidarity, not charity. When it’s charity, they come to give you something: here is educational material, educate yourselves. No. You need to actually work with them, sit with them. You join their struggles with all your skills, your capacities to help them address their deficits so that they can organize themselves, empower themselves. That is solidarity.”

With Inter Pares' solidarity and support, Popul Vuh will continue to work with community organizations in Matagalpa to democratically hold their governments accountable to those whose needs they serve. By working together, communities are able to negotiate access to public resources, which their labour and taxes have helped to generate, for their local priorities and initiatives. As citizens, they are participating in the construction of their own futures.

Health should not be treated as a commodity. Inter Pares and our counterparts believe that access to affordable health care is the right of each human being. The Pharmacare campaign provides hope for affordable, safe and universal.

A key element of economic justice is how societies collectively decide their priorities, and then collaborate on financing those priorities in an equitable manner. Although women’s health and human rights remain at the core of Likhaan’s work, their journey has taken them from addressing issues of community health to assisting poor communities in shaping decisions about where and how public resources are allocated.

Citizens’ groups around the world are increasingly raising concerns about the social costs that tax evasion is imposing on their societies. Offshore tax havens – commonly called offshore financial centers, or OFCs – are central to these concerns. Today there are more than seventy OFCs, many based in small island states such as the Cayman Islands and the Bahamas. OFCs levy little or no tax on income and provide few rules on incorporation.