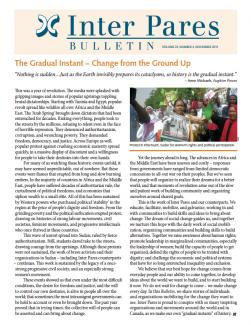 The Gradual Instant - Change from the Ground Up

2011 was a year of revolution. The media were splashed with gripping images and stories of popular uprisings toppling brutal dictatorships. Risking everything, people took to the streets by the millions, refusing to relent even in the face of horrible repression. They denounced authoritarianism, corruption, and wrenching poverty. They demanded freedom, democracy, and justice.

Agustín Jiménez is adamant that the path to peace must include human rights. In the late 1980s, he witnessed the deterioration of human rights in Colombia as the internal armed conflict escalated.

In the post-Marcos period, Junice and other health activists formed Likhaan, one of the country’s leading women’s health organizations. Through organizing and training women in slum areas as community health workers and advocates, Likhaan has created innovative and effective community-based women’s health programs.

A Not-So-MINI Campaign for Change

Farmers throughout large areas of Asia and Africa were once major producers of millet, but as governments adopted Green Revolution technologies, the emphasis was shifted to rice and wheat production. Millet was relegated to the status of the crop for the poor, one that “civilized” people did not eat. Yet millet is far more nutritious than rice or wheat and doesn’t require such high levels of chemical fertilizers or irrigation.