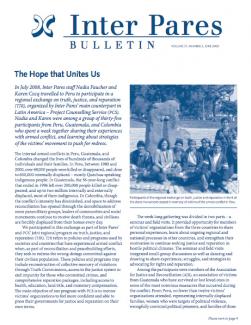 The hope that unites us

In December 2007, the world witnessed a rare sight: a former president brought to justice for human rights violations. Alberto Fujimori, president of Peru during the latter decade of the country’s armed conflict, was being tried for crimes he ordered the military to commit against his own people. Through his trial, Peruvians saw that even the most powerful person in the country could be brought to justice.

Inter Pares and Project Counselling Service (PCS) have produced a 30-minute film, Rising From the Ashes, to share our work in Peru through the inspiring story of four indigenous women. As survivors and activists, through their organizations they are struggling to create a more just and peaceful society by seeking justice for past crimes, by providing mental health support to other survivors, and by promoting women’s leadership within their communities.

Breaking the silence in the search for justice

From 1960 to 1996, a brutal civil war raged in Guatemala in which more than 200,000 people died. The war ended with the signing of Peace Accords, after which the United Nations-sponsored Historical Clarification Commission (CEH) spent two years documenting the atrocities of the war. The Commission’s report, entitled “Guatemala: Memory of Silence,” found the state responsible for 93% of the crimes committed during the conflict. The majority of the victims were indigenous. According to the Commission, this constituted genocide.