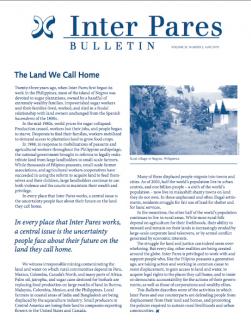 The Land We Call Home

As of 2005, half the world’s population lives in urban centres, and one billion people – a sixth of the world’s population – now live in makeshift shanty towns on land they do not own. In these unplanned and often illegal settlements, residents struggle for fair use of land for shelter and for basic services. In the meantime, the other half of the world’s population continues to live in rural areas. While most rural folk depend on agriculture for their livelihoods, their ability to steward and remain on their lands is increasingly eroded by large-scale corporate land takeovers, or by armed conflict generated by economic interests.

On the city’s margins

Decent housing is fundamental to people’s lives, and security of land ownership is critical to people’s ability to invest in their homes.

Land and Indigenous sovereignty in Chiapas

The Center for Women’s Rights of Chiapas (CDMCH) provides legal support for women so they can exercise their rights to land within the communal ejido land system, a right that is made more essential by the massive number of migrants, mostly men, leaving Chiapas in search of work.

To till the land

For millions of people living in rural areas, access to land is essential for survival. Inter Pares supports people as they defend themselves against forced displacement, and assists farmers to make more productive and sustainable use of their agricultural lands. We also support local initiatives that promote policies and regulations to facilitate rather than hinder small-scale farmers’ important contribution to food security.

The scramble to control farmland in Africa, Asia, and Latin America by state and private investors is not a new phenomenon, but one that has intensified in recent years.
In mid-2008, as the financial crisis deepened, and in the midst of increasing food insecurity, investors such as hedge funds, private equity groups, and investment banks – some of them Canadian – started buying up farmland in the South. These investors realized that there is money to be made in farming; there are many people to feed, food prices are likely to stay high over time, and farmland can be had for cheap.