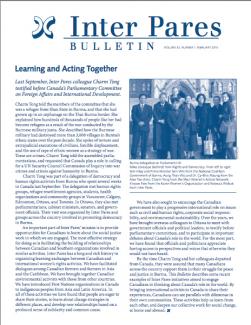 Learning and acting together

In September 2009, Inter Pares colleague Charm Tong testified before Canada’s Parliamentary Committee on Foreign Affairs and International Development.  She explained how hundreds of thousands of people like her had become refugees as a result of the war conducted by the Burmese military junta. She described how the Burmese military had destroyed more than 3,000 villages in Burma’s ethnic states over the past decade. She spoke of torture and extrajudicial executions of civilians, forcible displacement, and the use of rape of ethnic women as a strategy of war. These are crimes, Charm Tong told the assembled parliamentarians, and requested that Canada play a role in calling for a UN Security Council Commission of Inquiry into war crimes and crimes against humanity in Burma.

Educating and engaging through stories

Inter Pares produced a documentary film, entitled Rising from the Ashes, about the courageous struggles of women in Peru seeking justice for crimes of violence, including sexual violence, committed against them during the civil war.

Collaborating on health across borders

Building movements, one conversation at a time

Since 2003, the University of the Streets Café  in Montreal creates gathering places for citizens to pursue lifelong learning and engage in public conversations.

The private wealth of corporations is generated through access to the environmental commons, public subsidies, infrastructure, a trained workforce, and our publicly funded social systems. We must ensure that corporations make a fair contribution back to the public good and to the protection of the environment.