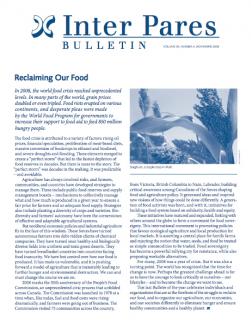 The food crisis is attributed to a variety of factors: rising oil prices, financial speculation, proliferation of meat-based diets, massive conversion of food crops to ethanol and biodiesel, and severe droughts and flooding. These elements merged to create a “perfect storm” that led to the fastest depletion of food reserves in decades.

From food insecurity to food sovereignty

In the Deccan region, women are the seedkeepers, and they preserve, lend, borrow and exchange the seeds of the crops they grow in their fields. They know that climate change will affect their agriculture but they feel prepared. Over generations they have developed seeds that are already adapted to a huge diversity of conditions and, Laxmamma adds, “we are happy to share them with others.”

In May 2008, Inter Pares, along with a coalition of social justice, international solidarity and farmers’ organizations, carried out a six-city tour across Canada to raise public awareness on agrofuels. Despite the touted benefits of agrofuels as a “green solution,” the use of food to feed cars and machinery rather than human beings is increasingly being questioned. Under the theme “Crops, Cars and Climate Crisis,” public debates were organized with local groups and with the participation of farmers, researchers, and activists from Africa, Asia, Latin America, and North America.

In the late seventies, Inter Pares and 125 organizations held hearings across the country. In 75 cities over 5,000 people shared their difficulties in producing and consuming quality, affordable food, and their visions for change. The People’s Food Commission inspired a vibrant community of food activists and organizations that have been working to reclaim the food system for the past thirty years. Taking into account what has been accomplished, and looking forward to the challenges ahead, two Inter Pares collaborators, Cathleen Kneen, Chair of Food Secure Canada, and Moe Garahan, coordinator of Just Food and a farmer herself, share experiences and lessons learned across generations of food activism.